Shine composer and producer Trina Belamide shares the story behind making the newest version of the song first made popular by Regine Velasquez in 2005. 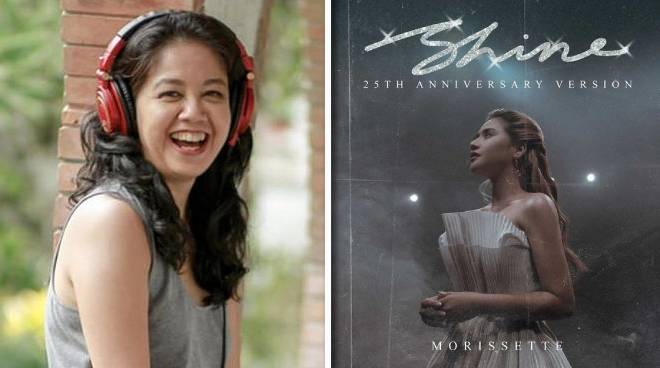 After having written songs for most of the country’s top recording artists, songwriter and record producer Trina Belamide shared the reason she wanted to record a new version of her hit song “Shine” on its 25th anniversary.

“Nung ginagawa ko siya, it was really my entry for Metropop in 1996. It was the first time they were bringing back Metropop. Nawala yan for a time eh. Kasi nung 1970s nung hindi pa ako nagsusulat ng kanta, it was the biggest songwriting contest in the Philippines. And then nawala siya from 1987 and then they brought it back in 1996 so I was fairly new. In my mind I wanted I already knew Ima Castro kasi friends na kami. She was a very skillful singer. Sobrang galing siya. Biritera. So in my mind I wanted a birit song kasi festival siya, contest song so sabi ko I wanted the concept to be ganun, kung ano yung papalakpakan ng mga tao (laughs). So ‘Shine’ was a positive, bright, but I wanted it to be a love song. It’s a love song that will bring out the best in you, ganun. A person, a loved one, who brings out the best in you. So that’s the concept of the song nung sinulat ko.”

Even though it was Regine Velasquez’s take on the song that made “Shine” a certified hit, Trina said she also has a deep appreciation for Morissette Amon’s version.

“Sabi ko gusto ko ng bagong version. Of course I love Regine’s version. That is what made the song a hit. But that was recorded for a commercial. So there were a couple of words that were changed  and then through the years siguro, mali mali yung naging lyrics ng karaoke, ganyan ganyan. Mali yung nakakanta ng mga tao. I want a new version that would make an impact. Para tama na yung mga kakantahin ng mga tao. It’s a song writers thing. Parang pet peeve namin yung mga ganyan.

“And dapat para may impact yung kanta, it has to be a big singer. Ang dami namang singers na option. I could have made it an independent release but Jonathan had a point. Sabi niya, ‘If you want to make an impact, lakihan mo na.’ Siyempre isa lang tao naisip namin. Morissette na yan. Kaya talagang tuwang tuwa ako when we were done with the final tape and mastering. Sabi ko there’s not one part of this na hindi ako masaya kasi most of the time as a producer myself, pag hindi ako yung gaagwa there would be parts here and there na puwede na yan, palulusutin mo. Dito parang happy ako sa whole thing, ganun,” she explained.

Trina along with Star Music producer Jonathan Manalo were the ones who handpicked Morissette Amon to sing the song.

“I’m really grateful for this song. It’s 25 years old and the history of ‘Shine’ continues this time with Morissette. Even before we thought about doing this version, kinakanta na ni Mori and I would always be happy pag nakikita kong kinakanta niya sa mga concerts tapos sa Wish bus nga may track siya nun and sa mga concerts abroad. Tapos nung Bayanihan Musikahan ibang take rin yung ginawa ni Mori. She’s really made the song her own so no-brainer, it really has to be Morissette. We’re so proud of it,” she said.

The veteran songwriter said she is proud of the song’s 25th anniversary version.

“We definitely wanted Mori’s take to be different kasi there’s the Ima Castro version, there’s the Regine Velasquez version. I wanted Mori to have her own talaga na different. But it was challenging kasi the melody was a certain way right? Two singers had already recorded it so ano pa yung puwede niya gawin na iba pero dikit sa melody? So it was really challenging. Sa melody ng ‘Shine’, she didn’t stray too far from the music but it was different so I’m so happy with it,” she added.