WATCH: Kim Chiu shows bags given to her by Xian Lim and Kris Aquino

Kim Chiu has uploaded the second part of her extravagant bag collection vlog. 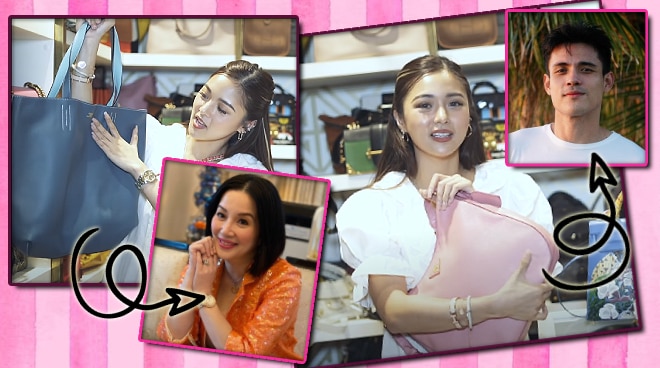 Actress and It's Showtime host Kim Chiu has uploaded the second part of her luxury bag collection vlog, where she showed the designer bags given to her by her boyfriend Xian Lim and her known close friend Kris Aquino.

She started by showing the pink Chanel bag she received from Kris as a birthday gift back in 2019.

"As a birthday gift, binigay niya sa akin 'to... Nagulat nga ako nung binigyan niya 'ko ng ganito. So nice, so cutie, and so pretty. Thank you, ate Kris. I miss you so much," she said.

READ: Kim Chiu thanks Kris Aquino for her special gift

She then revealed what was inside the Hermes box that was also given to her by the actress-host as a present.

As for the designer bags given to her by Xian, Kim showed a black quilted handbag by Alexander Wang.

According to Kim, another bag that she received from her boyfriend was a Prada handbag in the shade of pink, which is her favorite color.

Nevertheless, Kim explained that Xian, her boyfriend of more than eight years, rarely gives her material things, as his primary love language is quality time.

Meanwhile, in the second part of her extravagant collection, Kim also shared her first-ever Hermes Birkin bag, her go-to bag, and what she does to store and maintain her collection of designer bags. Check it out below:

Kim released the first part of her designer bag collection last May 9.

The actress, who started vlogging in September 2017, now has more than 2.28 million subscribers.