Marjorie Barretto on the issues her daughter Julia faced: ‘I felt like somebody was milking it’ 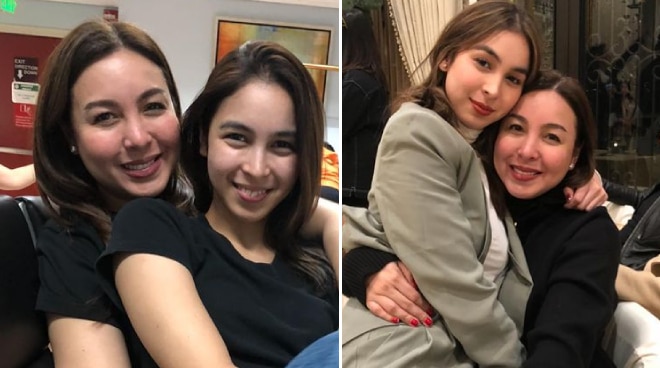 While some people still see Julia Barretto as a young girl, Marjorie — the actress’s mom — sees her as a woman exuding strength.

In a guest appearance on Toni Gonzaga’s YouTube channel, Marjorie opened up about handling public opinions about her family.

Despite her worries, the mother of five said she knows her kids can handle judgment from the public because of their strength as individuals.

“But now that I see my kids are older, I think it’s rewarding when they’re older eh. Rewarding in a sense na I still worry about them kunyari ‘yan nga, ‘yung judgment or ‘yung bashing or like that. They all get it eh. All of them,” she said.

She went on: “Wala namang spare key. I want to start worrying about them, but I realize they’re strong on their own. They’re so strong na kung ano ang strength na nakita nila sa akin, napick-up na rin nila ‘yun.”

Marjorie — who revealed that Julia got her strength from her experience in showbiz — admitted she initially disapproved of her daughter’s decision to enter the business in the beginning.

“Ang wisdom naman ni Julia comes from all her experiences in the industry. She grew up in the industry. And when she wanted to enter the business, I really said no. Then she really had to cry. I said, ‘It’s so cruel, it’s a different world,’” she said.

READ: Julia Barretto thanks Dennis Padilla for owning up to shortcomings as a dad

On why she eventually said yes, Marjorie said: “She really was crying. And she said ‘No, I can handle anything.’ So, her wisdom comes from a lot of hurt, a lot of pain a lot of forgiveness. So much.”

But Marjorie reminded her Julia’s critics not to underestimate her daughter.

“Si Julia, akala naman ng tao about her is like ‘Ah bata lang ‘yan’. You cannot underestimate her strength her. Sometimes, I’m like ‘Juls, ako na ‘yan.’ Ako na ‘yung nag-woworry for her. She’s like ‘Mom, no. That’s nothing.’ She’s strong,” Marjorie said.

When asked about the controversies her daughter faced in the past two years, she said: “Julia’s been through so much issues. Since she was sixteen. And she can really handle herself naman. She’s very strong. But sometimes, it is so frustrating when you know the truth.

“You know the struggle of not talking? I don’t know if people pleaser ako. Maybe ayokong isipin ng tao na palengkera ako ganyan. Pero meron akong moments. I tell you and I always tell my kids, ‘I want to remind the person who always hits on my daughter na buhay pa nanay niya ha.’ Buhay na buhay ako. You better know when to stop,” she added.

“Bashers, they don’t count. To be honest, this is not addressed to them because just block and delete and they’re out of our lives. You know what I mean? It’s when these people continues to really paint a really ugly picture of my daughter, I think they just have to be reminded that there is hangganan. I can be nice and I can be quiet, but when I do talk, I tell the truth,” she said.

While Marjorie wants to come after her Julia’s bashers, she said her daughter wants to handle everything on her own.

“I think that’s my reward. God gave me all these kids and alam ko ‘yung mga anak ko all I really want is to equip them for the outside world. And I think they’re more than equipped,” she stated.

On the issues her daughter faced, she said: “Can I say? I felt like somebody was milking it. Parang it’s just not a story. Pero hindi masyadong masakit ito. Mas masakit sa akin ‘yung issue before with her dad. That one was more painful for me.”

She added: “This one kasi this person is not part of our lives naman ‘di ba? Mas masakit sa akin when Julia was younger and her issue about her dad. So that was more painful for me because I couldn’t protect her so much without going against her other parent.”

Marjorie then went on to praise Julia for being a good daughter. “Mabait si Julia. What I admire about Julia is she is looking out for herself. Like now, she’ll do what makes her happy,” she said.

“Marunong na siya na she’ll look out for herself, ‘yung happiness niya, whatever brings her peace,” she added.

“I told Julia that before. There will be so many people who will pretend to care for you or have concern for you. But if there is that one-person na never kang ipapamahak, who will give you the best advice, it’s the mom,” she remarked.