Nonie Buencamino, Art Acuna, and Ces Quesada share their favorite moments on the set of ABS-CBN and Electric Entertainment series. 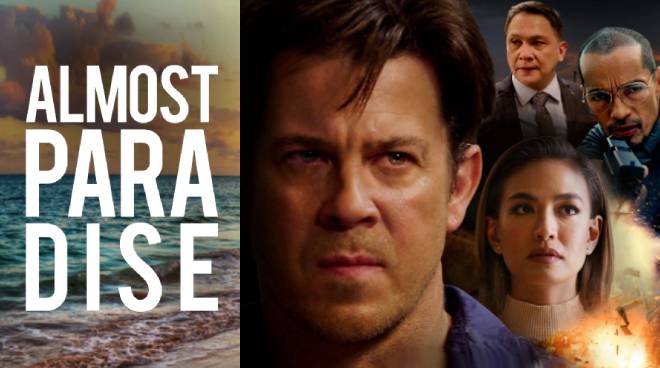 Ever since its online debut last March 21, ABS-CBN and Electric Entertainment’s historic crime drama series Almost Paradise has championed Filipino talent. The series is now on its last two weeks on the Kapamilya Channel and A2Z.

As the first American TV series shot entirely in the Philippines, Almost Paradise features the beauty of Mactan, Cebu. The Filipino cast and crew of the series promise world class entertainment in the final two chapters in the story of former U.S. secret agent Alex Walker (Christian Kane), who was drawn back to his old life after retiring in the paradise of Cebu.

According to ABS-CBN International Production and Co-Production Division Head Ruel Bayani, the company really wanted to show the world the quality of content made by Filipinos through this project. “Ito ay malaking pagkakataon para maipagmalaki at ipayakap sa mundo ang ating talento at ating kakayahan,” he shared during the Almost Paradise virtual media conference last May 12.

“I think isa sa pinaka-naappreciate ko is ‘yung process of audition. Kasi sa audition you make sure that the right people get the roles. So pagdating sa shooting, you’re confident na they can do their roles,” explained Ces, who flew in to Cebu for her one day shoot.

Art Acuna, who has done a variety of roles both for local and international productions, said his role as detective Ernesto Alamares has been one of his favorite roles to play onscreen. The seasoned actor also enjoyed the time spent with his co-stars off camera as well.

“We also had nightcaps together after a shoot and we talked about everything. So my fondest memories are very people-oriented. It was a lot of laughs and I’ve been a fan of Nonie for a very long time. I’ve known him more deeply as a person and he became a good friend of mine. it’s special for me,” he explained.

Behind the camera, Almost Paradise showrunner Dean Devlin, the CEO of Electric Entertainment and Hollywood producer of films like Independence Day, Godzilla, and The Patriot also worked with a Filipino staff and crew. The series also tapped into the talents of top local directors in Dan Villegas (Episode 4), Francis Dela Torre (Episode 3 and 7), Hannah Espia (Episode 6 and 9), and Irene Villamor (Episode 8).  “The themes are very universal and maraming nakapaloob na genres. It speaks to a wider audience,” Hannah said.

Electric Entertainment head Dean Devlin also shared that among all the projects he has done, “everybody seems to like Almost Paradise,” especially among Filipinos abroad like him. “We are getting so many heartfelt letters and DMs from Filipinos here and around the world who are saying that they feel seen. To have this show where we are really changing minds and hearts, it adds a sense of pride in the show not just for the Filipinos in the Philippines but for Filipinos everywhere. It captures the heart of why Filipinos are such wonderful and special people,” he said.