Manny Pacquiao and his wife Jinkee celebrated their 22nd anniversary as a married couple on Sunday, May 9. 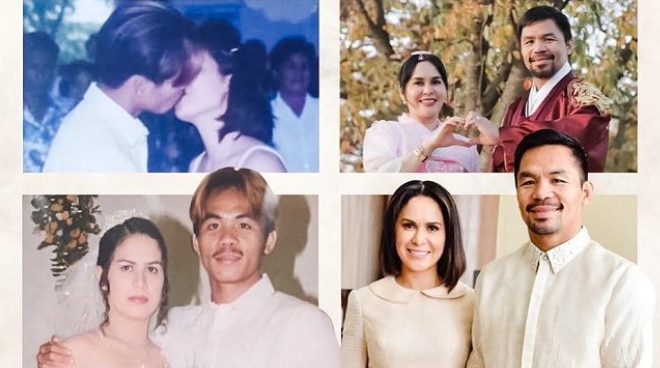 Manny Pacquiao and his wife Jinkee celebrated their 22nd anniversary as a married couple on Sunday, May 9.

The two took to social media to mark the special occasion.

In an Instagram post, Manny, a boxing champion and Philippine senator, expressed his appreciation for his wife and vowed to love her forever.

"Happy 22nd anniversary babe! On this special day, I thank God for every moment spent loving you. I don’t know where I’d be in life without you. With the guidance and grace of our Lord, we have proved that nothing is impossible. My career has reached heights because you are by my side. Words cannot express how much I adore you. I will love you always and forever. Happy 22nd anniversary babe!" he said.

For her part, Jinkee, a celebrity and social media star, penned a shorter but nonetheless sweet message for her husband.

"Happy 22nd Wedding Anniversary to us! Spending time together is, and always will be, my favorite thing," she said, before adding the hashtag #GodIsGoodAndGreat.

Manny and Jinkee, both 42, have been married since they were 19.

In an interview with Anthony Taberna in 2014, Manny admitted that his relationship with Jinkee was affected by his vices, which included gambling and womanizing.

He said it was when he changed his faith and became a born-again Christian in 2010 that he found peace in his married life.