Derek Ramsay reveals the story behind his engagement ring to Ellen Adarna. 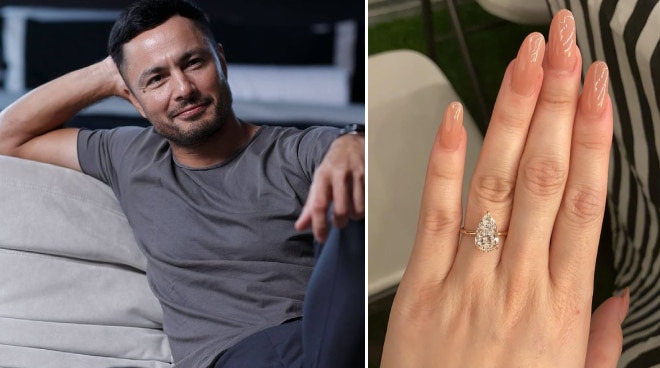 After making headlines after his surprise proposal to Ellen Adarna last month, Derek Ramsay said he is not bothered anymore by bashers online who only have negative comments about their relationship. One of the malicious rumors included suspicion that the ring he gave his fiancée was recycled from his other ex-girlfriends. The 44-year-old actor put the issue to rest during an interview with G3 San Diego on #LiveWithG3 last April 5.

“So sa mga bashers na sinabing pinagpasahan ko ‘to eh di dapat nasa news ako na engaged na before di ba? First time ko narinig na ex-deal. That’s funny pero yun nga, they said that this ring has been passed on to all my exes and that’s just so low. Because the stress I had with the ring everyone saw it. I’m numb already. I don’t understand their way of thinking anymore. Dati I’m Mr. F boy who doesn’t take anyone seriously and then when the article came out and they saw how honest I was about my feelings for Ellen, they said that I’m just like that to every one of my girls. I propose to Ellen, I proposed na pala to all my girls. Naguguluhan na talaga ako. There’s stuff na I’m marrying Ellen because of the money. Parang sige na, just throw whatever it is that you want at me. I’m a happy boy and I think if you guys can see that you’re my friend,” he said.

Although he refuses to divulge how many carats the ring he had specially made was, Derek proudly said that he paid for it in full price.

“My mom was going to give me a 7.8 carat to give to Ellen. I was like, ‘Mom, I can’t take that from you. I think a 7-carat diamond is just way too big for an engagement ring. So, if you want to give that to me to give to Ellen as a pendant or a necklace for the future? Sabi no I want to purchase this one.’ So, I learnt a lot about diamonds and there’s chismis na pinagpasahan daw ito ng mga exes ko which is so funny. It was perfect. It was how I imagined it. It just came out perfect. I tagged the people who did the ring because I’m appreciative. There’s no ex-deal here. Nothing of the sort. My God ang cheap naman nun. This is me getting married. This is me proposing. Hindi ko nga tinanggap yung 7.8 carat diamond from my mom di ba?” he explained.

Derek said he had the ring specially done to his specifications and was not even sure the ring would be ready in time for his proposal.

READ: Derek Ramsay and Ellen Adarna are getting married this year

“I was fishing and I thought because she has really nice hands, a pear-shaped diamond would look perfect on her hand. I was so scared kasi dapat April 2 her birthday and we were all having lunch saying, ‘Guys on my birthday I don’t want anything happening.’ And I was like, ‘Oh my God everything’s set for April 2. What are we going to do?’ And her friend was with us and I was looking at her thinking oh my God. I believe in numbers eh so April 2 adds to 11 and that 11 is important to me so March 30 I text the painter for the gifts that I have for her, I text the ring and they said when it will arrive. We moved everything. Ang bilis ng pangyayari. Everything’s set and then suddenly, a day before wala pa rin yung ring. Because ECQ happened. I tagged them because they really did a good job and they got it here in the short span of time that I asked them and I was appreciative of that. Imagine my feeling when I got it on the day. I wasn’t even sure it came out the way I wanted it and when I saw it, it was really beautiful. I wanted the stone to speak for itself,” he said.