In a vlog released on Sunday evening, April 4, celebrity couple Jessy Mendiola and Luis Manzano announced that they have tied the knot. 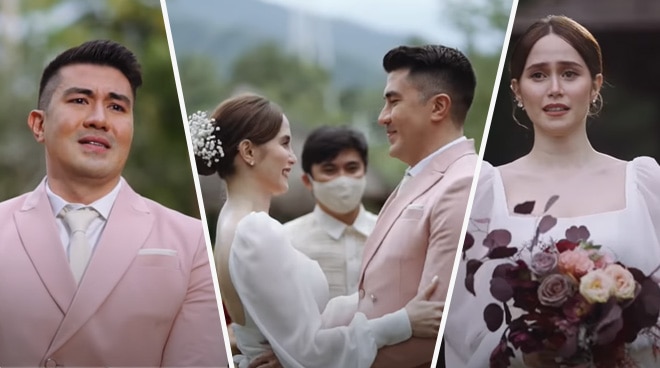 The two made the revelation in a vlog uploaded on Sunday evening, April 4, on Jessy's YouTube channel.

The five-minute video gave a glimpse of their intimate wedding held at The Farm in San Benito in Lipa, Batangas last February.

Jessy looked radiant in a white pleated dress by Patricia Santos, while Luis rocked a pink suit by Paulo Lazaro.

The vlog's highlight is the part where the couple exchanged vows before their guests.

"Howhow, as we take the step today, I want to promise you that I will love you each day that comes, even in those days na pareho tayong di kamahal-mahal. I will choose to love you. I promise to be your rock when you’re weak, to put a smile on your face, even on the darkest of days,” said Luis.

"We have been through so much. So many smiles and tears, but I would do it all over again if it means leading me back to you. Howhow, I will love you every single day of forever... I love you," he added.

For her part, Jessy said: "I will protect you, and I promise that if you grow weak, I will be there to fight your battles for you. Today is the beginning of our journey, our lives together. I choose to spend today, and all of my tomorrows with you. I love you, Howhow."

Jessy, 28, and Luis, 39, announced their engagement last December, after more than four years of being a couple.

The two will be celebrating their fifth year together in June.