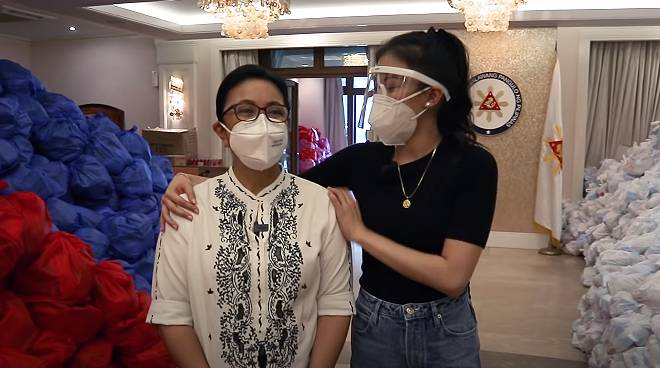 In the vlog titled "Mama for a Day," Alex visited the vice president at her office and dubbed her as her new "mama."

VP Leni gave Alex a tour of the building where she goes to work. During the tour, the building was packed with goods which the vice president and her team have been using for their relief operations.

It was a holiday when Alex visited VP Leni's office. Asked why a lot of her staff were in the office despite it was a holiday, the vice president replied, "Sa amin mula nong nag-COVID walang holiday 'yung pangangailangan ng tao so meron talaga mga pumapasok."

Alex also asked the vice president about her late husband Jesse Robredo. According to VP Leni, they just celebrated their 25th anniversary that time when the plane crash happened that took the life of her husband.

Would she want to look for another partner?

Alex also asked VP Leni on how she deals with her critics.

Alex and VP Leni also packed some relief goods in the vlog.

VP Leni also did a video call with mommy Pinty. In their video call, mommy Pinty shared that there were instances that people thought she was the vice president.

Alex ended the vlog by sharing a meal with VP Leni. Her husband Mikee Morada also dined with the vice president.

The vlog has already gained more than 1.5 million views as of this writing. The vlog was shot last December.

In the comment section, many netizens expressed their admiration for the vice president.

"VP Leni shows what a strong woman can do despite all the hate she gets from others, her main goal is to do her job and help the people. This is one of my favorite vlog of yours, Alex!" one netizen said.

"See a very loving and hardworking person. Filipinos are very lucky to have you, Madam!" another netizen said.