Toni Gonzaga gave a tour of her massive master’s bathroom which boasts of an all-white interior. 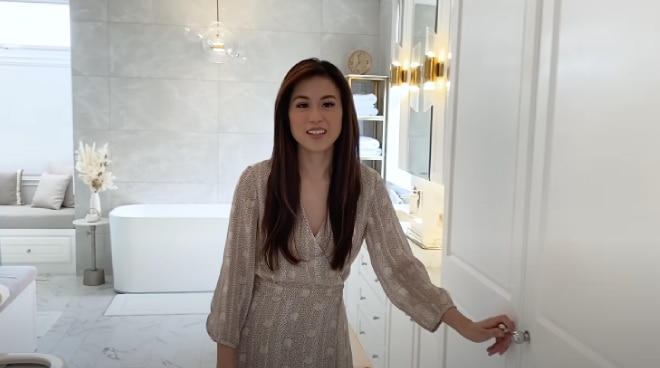 Toni Gonzaga gave a tour of her newly-renovated master’s bathroom in a vlog released on Monday, April 26.

Instead of getting luxury items or accessories as an anniversary gift last year, the 37-year-old actress and TV host shared she had asked for a bathroom renovation project from her husband Paul Soriano.

In her latest vlog, the I Feel U host gave a tour of her newly transformed master’s bedroom which she and her husband have managed to turn into a maximized space through a design studio called CreativSpaces. It boasts of a sleek minimalist design.

“Paul asked me last year ano’ng gift daw ang gusto ko for our anniversary. And I just said don’t buy me shoes, bags, or jewelry. Just give me my dream all-white master’s banyo. So, I got Creative Spaces to help me come up with a design that can maximize the space that we have,” Toni said.

The master’s bathroom of the multimedia star has his and hers toilets, a lighting system with a voice command, a reading nook, and a state-of-the-art bathtub.

Her master’s bathroom also has an entrance leading to her walk-in closet which also houses some of the books she loves to read during her me time.