ABS-CBN expressed its support to actress Angel Locsin, who recently made headlines for the community pantry she organized to celebrate her birthday. 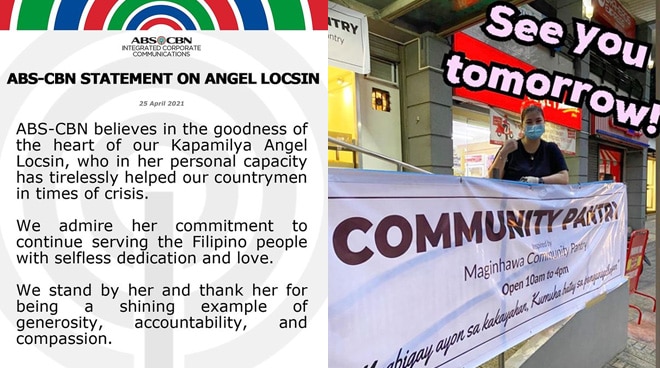 ABS-CBN expressed its support for actress Angel Locsin, who recently made headlines after a 67-year-old man collapsed and died while waiting in line at the community pantry she organized to celebrate her birthday.

In an official statement, the network said it "believes in the goodness of the heart" of Angel, "who in her personal capacity has tirelessly helped our countrymen in times of crisis."

"We admire her commitment to continue serving the Filipino people with selfless dedication and love. We stand by her and thank her for being a shining example of generosity, accountability, and compassion," ABS-CBN added.

In her own statement last Friday, April 23, Angel confirmed and apologized for the death of the elderly man, who was identified as balut vendor Rolando dela Cruz.

According to Angel, she will prioritize helping the family and will make it her responsibility to help them get through the ordeal.

The late vendor's family earlier said that they are not blaming Angel for his demise.

Following the incident, the government of Quezon City issued guidelines on the organization of community pantries within the city to ensure the observance and strict implementation of minimum health standards.