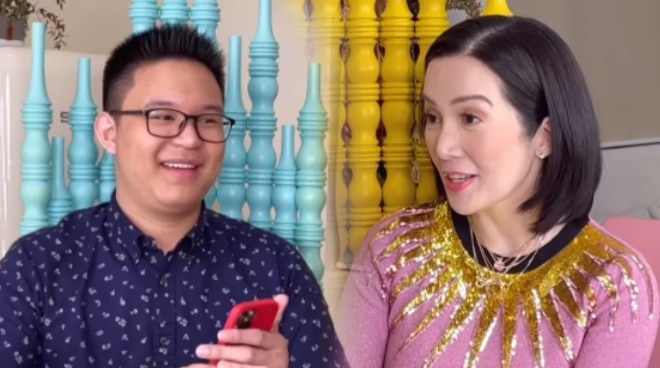 "Honestly, I just took the job," ani Kris. "As in, leap of faith. You know, because maybe I had that hang-up because the first two serious relationships, they... the dad of your kuya was not yet annulled, and the next one was also not annulled."

Pagpapatuloy ng aktres: "You know, what made your dad special was that initially, he trusted me by telling me something that he didn’t have to tell me... I was impressed kasi he did not wait for me to hear about it from other people or read about it in the tabloids. In fairness, at the time, [he had balls].

“I think I was at a place naman na I felt I wanted to be married. Because parang feeling ko I was 34, your dad was 11 years younger, and I felt it was weird because the one [who] came before him was actually 11 years older... [while] kuya’s dad was 18 years older.

“Can I just clarify? Enough time has passed na I now feel just so grateful. Because without him, there would be no you," sabi ni Kris kay Bimby.

"‘Yung parang, there’s no more of the... na let go na lahat ng kung ano man ‘yung mga hurt feelings, bad feelings, and all. It’s just that I’ve learned to look at the glass as being half-full, but because of you, it’s not just half-full. The glass is overflowing," dagdag pa niya.

"Yeah. I liked him," pag-amin ni Bimby nang tanungin siya ng ina tungkol sa kanyang opinyon kay Herbert. "Because he was intelligent enough to notice boundaries. Parang he didn’t try to be my dad. And he knew that nothing will break us. Because like we’re titanium. I think he’s a good guy."

"I had happy times. He has never been married, so I don’t think that would work. I think na kailangan pareho kayo ng pinagdaanan. Because with what I went through with your dad, at least, it’s very clear. We know where it started, we know how it ended. So I think it lasted as long as it did because he knew when to come in and when to go out. And he really became my friend. That’s what I miss, I miss being friends. But you know, you can’t be friends. Yeah.

“We are better off just steering clear of each other. But he gave me good memories. Kung ‘yun lang ang bitbit ko, at least, meron. And I was thinking about that, that he was a part of my life for half of your existence. Maybe it would not end the way it should, but at least it ended. At least we know. It was an intellectual ending, not an emotional one. Nagka-intindihan kami."

"I am so proud," ani Kris. "Mas matalino, mas matatag, mas malawak ang pangunawa ng bunso ko kumpara sa mama niya when I was his age, and even now in many ways, he really is the better me!"