Kapamilya actress Maymay Entrata celebrated her fifth anniversary in show business by appearing on the cover of a local fashion magazine. 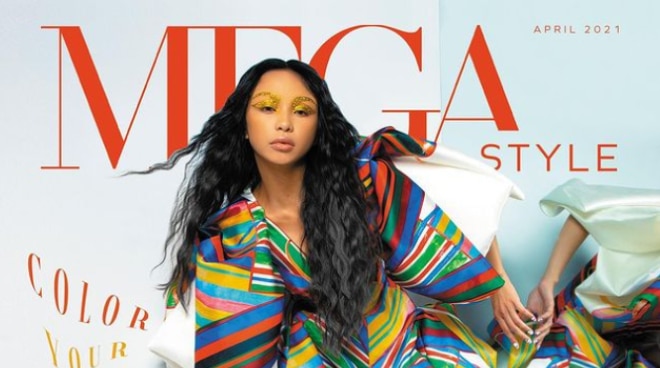 Maymay Entrata celebrated her fifth anniversary in show business by appearing on the cover of a local fashion magazine.

The Kapamilya actress was revealed on Thursday, April 15, as the newest cover girl of Mega Style for its April 2021 issue.

In one of the covers, which was shot at the UP Vargas Museum, Maymay once again showed her glamorous side as she posed in a sculptural multi-colored short dress by Mara Chua and gold strappy heels by Jefferson Si.

In her interview with the magazine, Maymay talked about celebrating her fifth year in the entertainment industry.

The 23-year-old rose to fame after winning the reality show Pinoy Big Brother in 2017. She went on to become one of the biggest names in the industry, notably alongside her onscreen partner Edward Barber.

Maymay also opened up about the biggest challenge she's encountered since she joined showbiz five years ago.

"One of the biggest challenges is 'yung biglaang change ng buhay ko. It was a challenge to adjust in the beginning hindi lang sa trabaho kundi pati na sa mga katrabaho ko. It wasn’t easy growing into this craft that’s why kapag may opportunity to learn and improve, kinukuha ko po talaga because I am really passionate about this craft," she said.

As to the best learnings she has absorbed in the past five years, Maymay said: "I learned to not depend on anyone’s approval but God’s. Dahil dumating sa point na naging people pleaser ako kung saan di siya naging healthy because it came to a point that I wasn’t my real self anymore. I also accepted na di lahat talaga ay mapapasaya mo. The only ones you really need ay yung mga taong tanggap ang buong pagkatao mo."