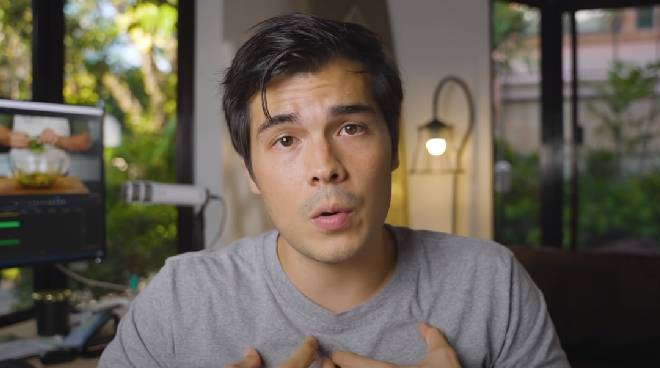 After a decade of creating food and travel vlogs on his YouTube channel, Erwan Heussaff said he is ready to say goodbye to vlogging.

In his last vlog titled I’m Leaving YouTube posted last April 6, the 34-year-old husband of Anne Curtis shared how it all started for him online.

“I’ve been creating videos for 10 years now and it’s been a wild and crazy ride but I think it’s time for change and I think this is one of the scariest things I’ve ever done. I started The Fat Kid Inside when I working in a large scale catering operations in Russia and in restaurants. I really started it as a hobby to first talk about my weight loss story that I had gone through and just share the recipes that I love to cook. So I posted those videos on YouTube, on Vimeo, on Facebook and eventually created a vlog called The Fat Kid Inside and that’s how it all started. For the longest time I was a one-man team. While going through this process I realized that I love the business side of production and I loved producing content. And I wanted to do more. Tell more stories, feature more people, and go bigger with our ideas. But for the longest time I felt so limited to me, to Erwan Heussaff, because that’s what our Facebook channel is called. It put us as a company, not me personally, but us as a company, in a box,” he shares.

After welcoming their daughter Dahlia to the world last year while they were in Australia, Erwan said he was still working seven days a week and 14 hours a day even during the lockdown in order to be able to pay his 14 employees.

“For a couple of months in 2020 work completely stopped. Brands didn’t want to post online because people were being very sensitive obviously. We didn’t have any commercial production shoots. I was also stuck in Australia. So for months we weren’t having any revenue coming in but all the employees of The Fat Kid Inside Studios still had to get paid. So I basically was put in a situation where I had to double down on the content that I was producing on Facebook and on YouTube to hopefully generate revenue to be able to cover all those costs. I get emotional talking about it because it was a very difficult time. You know my daughter was just born so I was learning how to be a dad. But I had all this anxiety and all this pressure to keep the company afloat and to make sure that people kept their jobs. It wasn’t easy. It was very tiring but it was also a very magical time in my life because I became a dad and I have a beautiful wife and a beautiful daughter,” he explained.

READ: Erwan Heussaff shares experience being a full-time dad to daughter while in Australia

After returning to the country last March with Anne and Dahlia, Erwan revealed that he is rebranding their channel to Featr which is a channel that will be open to working with content creators, brands, and other production companies.

“I really want to be able to take the time to select the shows that I host and am part of in front of the camera so I can really get to put out great content. And for us to be able to do that, I really need to focus on the business but I also need to focus on producing other shows with other hosts and other people. And that is why we are no longer Erwan Heussaff, we are now going to be called Featr. But don’t freak out, on Featr you’ll still be able to enjoy everything that you’ve loved on this channel. We’re just adding more to it. It’s a really scary thing to take a successful online business and completely change it but I really do believe we are nothing without change and without discomfort. You’ll still get all the videos that I personally host, all the travel videos when we’re allowed to travel, all the food videos and, all the good stuff that you’ve really liked along the years. But on top of that, we’ve already produced other shows hosted by other chefs, other cooks, and these will already be rolling out within the next two days. So you’ll see all these fresh faces, documentaries, and shows that we’ve been working hard on over the last year,” he said.