Gerald Anderson and Julia Barretto spearheaded a relief operation in Zambales as part of the actor's 32nd birthday celebration. 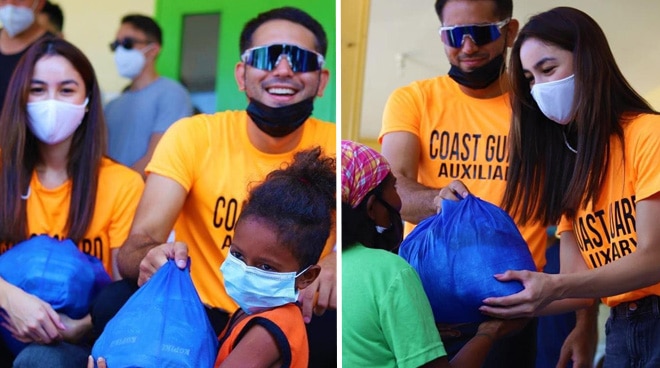 Following his admission of their relationship, couple Gerald Anderson and Julia Barretto were spotted in their first public event together on Saturday, March 6.

As detailed on the Facebook page of the Department of Transportation, the couple lead the relief operation together with the Philippine Coast Guard in Barangay San Agustin in Iba, Zambales on Saturday as part of Gerald's birthday celebration

"The Philippine Coast Guard (PCG) supported the relief operations in celebration of the 32nd birthday of Lieutenant Commander Gerald Anderson of the PCG Auxiliary (PCGA)... With the generous participation of the World Vision Philippines and actress, Julia Barretto, a total of 300 Aeta families residing at the Lupang Pangako Resettlement Area in Barangay San Agustin received basic commodities such as rice, canned goods, instant noodles, biscuits, coffee, chocolate drink, and hygiene supplies during said initiative,” DOTr said in its Facebook post.

In the same post, Gerald was quoted saying how grateful he was to have celebrated his birthday with the community.

It was on March 5 when Gerald revealed the real score between him and Julia.

In an interview with Boy Abunda, he said that he is very happy with Julia.

Gerald also addressed the allegations that he "ghosted" his ex-girlfriend Bea Alonzo.