Toni Gonzaga sat down for an interview with Janella Dapusala, a 16-year-old girl who was diagnosed with stage 3 ovarian cancer. 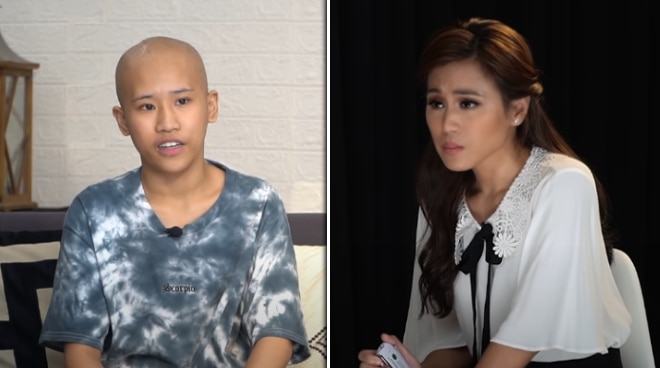 In a special episode on her YouTube channel, actress-host Toni Gonzaga sat down for an interview with Janella Dapusala, a 16-year-old girl who was diagnosed with stage 3 ovarian cancer.

According to Toni, she invited Janella to guest on her vlog after she encountered her story online. The latter recently went viral after sharing on Twitter photos showing her shaved head, along with the caption: "Cancer ka lang, maganda ako."

During the interview, Toni and Janella discussed her battle with ovarian cancer. Janella said it was just last September when she first experienced a sharp pain in her abdomen.

On October 4, the same day her grandmother died of breast cancer, Janella was rushed to the hospital due to severe abdominal pain. At the time, the attending doctor and nurses thought she was pregnant, so she was tested for pregnancy.

According to Janella, she was supposed to undergo an operation on October 29. However, she ended up having the surgery three days earlier, on October 26.

According to Janella, she keeps herself distracted by listening to her favorite K-pop group BTS or bonding with her siblings so she wouldn't drown in sadness.

While it was initially hard for her to deal with her illness, Janella said she never questioned God and never allowed her faith to waver.

At the end of the video, it was revealed that proceeds of the vlog will all go to Janella's chemotherapy.

As of this writing, the video has been viewed for more than 700,000 times since it was first uploaded on Monday, March 29.