Celebrities took to social media to express their happiness for Ellen Adarna and Derek Ramsay,who recently announced their engagement. 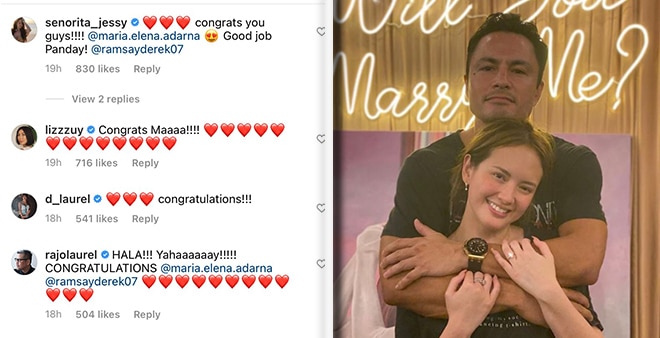 Celebrities took to social media to express their happiness for Ellen Adarna and Derek Ramsay who recently announced their engagement.

The couple made the announcement on Tuesday, March 30, sharing photos of the surprise proposal held in the actor's home in Alabang on Instagram.

On her Instagram Stories, Ruffa Gutierrez, who was present during the dinner party in January that first sparked rumors romantically linking them, congratulated Ellen and Derek.

"Congratulations. When you know, YOU KNOW. Cheers to forever!" she said.

Coleen Garcia, Derek's former leading lady in the 2015 film Ex with Benefits and Ellen’s co-star in Pasion De Amor, also shared her happiness and excitement for the couple.

Tagging Derek's Instagram account, Coleen wrote in her Instagram Story update: "Soooo happy for you friendship. I've never seen you like this before, and I feel you're truly at your happiest! Congrats to you and [Ellen]. Love you both, and so excited for you and your new familyyyy!"

Before coming out in public with their relationship last month, Derek and Ellen met on a blind date set up by their mutual friend John Estrada. They were seen on social media spending more time together this year, along with Ellen’s son Elias, with former boyfriend John Lloyd Cruz.

READ: ‘I mean no disrespect to him,’ Derek Ramsay says of John Lloyd Cruz after posting video with Elias

In a previous interview, Derek admitted that he believes Ellen is already “the one” for him.

“My heart tells me if I don’t follow through with this one, I’ll regret it. Everything in my heart is telling me that she’s the one," he said.