WATCH: Julia Barretto gets intimate as she bares what she’s like whenever she’s in a relationship

Julia Barretto wants to keep her intimate moments with her partner ‘valued’ and ‘protected.’ 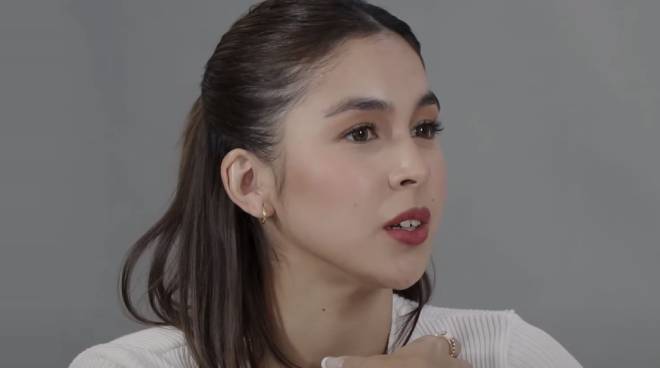 Julia Barretto gave fans a closer, more intimate look at what she’s like whenever she’s in a relationship.

The 24-year-old actress released a “He Said | She Said” video for her latest vlog, sharing her thoughts alongside Marco Gumabao on various topics which men and women have differing opinions most of the time.

Julia said it’s important to keep her intimate moments with her partner as private as possible.

Julia went on to share her thoughts about men who kiss and tell, saying: “Also, I feel like any guy who really respects the woman that they wanna be with tapos kiniss nila or whatever or they had an intimate moment with — if they really respected that girl, they wouldn’t kiss and tell. You’d not do it to anybody you’re serious about.”

She also shared her thoughts about couples who are trapped in an on-off relationship, saying she isn’t the type to easily break up unless it’s no longer something she can save.

“Personally, I don’t. Like even if we’re in the worst fight ever, it’s not something I will throw in. I’ll only tell you that when I’m done. When I’m not done, you’ll never hear me say I’m done,” she said.

On what she thinks about getting told by her partner what to wear, she said: “Sa akin, at this given time, I see it as protective and caring. So, I don’t see anything wrong with it when I feel like my man is not comfortable in what I’m wearing. I think it really depends.”

This isn’t the first time Julia collaborated on a vlog with Marco Gumabao whom she considers one of her closest male friends in showbiz.

Meanwhile, Julia recently made public her relationship with Gerald Anderson whom she has been romantically linked with since 2019.