‘Dito at Doon’ star Janine Gutierrez talks about her upcoming acting projects this year on TV and film. 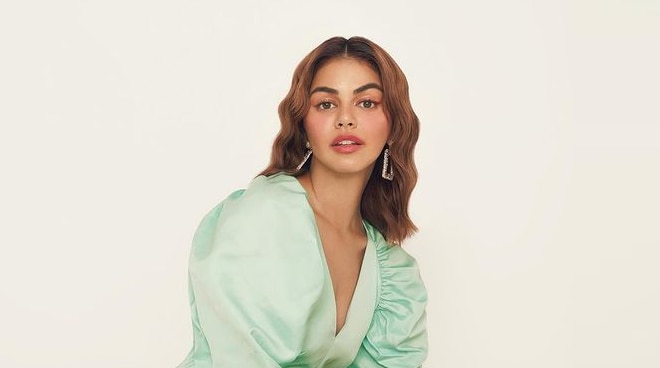 After more than a decade since following in her parents’ footsteps and joining the entertainment industry, new Kapamilya actress Janine Gutierrez said she is excited for all the projects lined up for her this year on both the big and small screen.

“For 2021, I have a teleserye coming up with ABS-CBN so I’m very excited about that. I filmed a film in January called Best of Show so it will be coming out soon. It’s directed by Auraeus Solito. This is his comeback film after six years so that’s going to be exciting. Tapos I have a film also that I show last month lang in Bicol with Pepe Herrera so that will be coming out also soon and this month I have a film coming out called Dito at Doon with JC Santos so it will be released in KTX, Cinema76, iWant, and Ticket2Me on March 31,” she told PUSH during the Bio-Science Philippines Bio-Water Vitamin B5 Gel launch held at SM Aura earlier this month.

Before becoming available for streaming in the Philippines, Janine shared that her latest TBA Studios film project Dito at Doon actually had its world premiere at this year’s Osaka Asian Film Festival under the New Action Southeast Asia Section held earlier this month.

Aside from acting projects, the 31-year-old actress also felt blessed for endorsements like being the celebrity ambassador of Bio-Science Philippines skin care products.

After Dito at Doon, Janine said she is also looking forward to her next projects which she cannot divulge details about just yet. “In my professional life I’m really excited about the movies I’ve been able to do because parang ang lawak nung pagkakaiba nung mga kuwento at nung mga characters. So excited ako na maipakita at magawa yung mga iba-ibang side na yun. And sa TV I’m really excited to do another teleserye. It’s been two years I think since the last time I did a TV show. I’m excited because this one that I’m going to do is one that I haven’t done before so I’m really looking forward to that,” she said.