Derek Ramsay on Ellen Adarna: ‘She’s the one’

Asked whether he’s in love, Derek Ramsay says he believes that his girlfriend Ellen Adarna is already ‘the one’ for him. 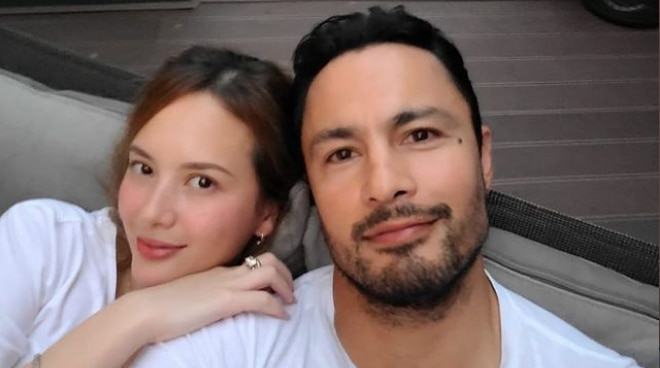 For the first time since confirming that they're dating, Derek Ramsay opened up about his relationship with his new girlfriend Ellen Adarna.

In an interview with G3 San Diego for Mega Entertainment, Derek revealed that prior to the dinner party in January that first sparked rumors romantically linking them, he and Ellen had already met on a blind date set up by their mutual friend, John Estrada.

“We follow each other on Instagram. But we didn’t formally know each other. We were supposed to work together before, in a movie. But that didn’t materialize," he said.

"I really [didn't] want to do this blind date. I hate blind dates," he shared. "[But] I ended up going. And it was funny because when I got there, I was finally introduced to her. So, yeah, it was a wonderful evening."

At that time, Derek recalled seeing another common friend of theirs, Ruffa Gutierrez. According to the actor, it was the actress-host who gave him the idea to host a dinner party after she told him and Ellen that they were all neighbors.

"Ruffa was at another table. She came around the corner and saw me and said, ‘I’ve known you for years,’ and she said, ‘You know that I live a few houses down from you, and she does, too.’ And I was like, ‘Sige! I’ll host a dinner for all of us,'" narrated Derek.

According to the actor, it was during the dinner party at his home that he realized he had feelings for Ellen.

"She met my dad. My dad was seated right beside her. Most women would have been, you know, prim and proper. But she was herself. And that’s what made the evening really, really wonderful,” he recalled.

After being romantically linked back in January, both Derek and Ellen denied being a couple, with the actress even saying that the hunkyactor is not her type.

However, in a joint interview a month later, the two admitted that they were in a relationship.

Asked by G3 if he's in love, Derek said he believes that Ellen is already "the one" for him.

“I think she’s the one. And I say it’s going to happen quick,” he said.

“Seriously. Like no joke," he continued. "Sometimes you need to live a crazy life. I’ve always been living a safe life, and now, parang holy sh*t! I don’t know what’s coming. I don’t know what’s happening... I’ve had so many relationships, you know? But there’s nothing like this talaga. Like we were up all night just talking about it. Two Alphas. We’re both f*cking Alphas!”

On whether he sees himself settling down with Ellen, Derek said: “My heart tells me if I don’t follow through with this one, I’ll regret it. Everything in my heart is telling me that, she’s the one. And my heart’s telling me, I did not even listen to this anymore (points to his head). You know, this (his head) was controlling this (his heart) so many times before. This is to say, screw the brain! Don’t listen to it! Don’t even let it guide you, okay? Ito na nagsasalita na ako. Ito na, manahimik na lahat!

“It’s an incredible feeling that I wish everybody would experience. It really is. And I’m so happy that I took my time," he went on. "It’s just strange how all of this happened. It came out of nowhere! She’s from Cebu. I’m from here. She becomes my neighbor. She’s walked past my house a few times, because she goes out for walks with her son. And then an opportunity was given for us to meet.

"We didn’t waste time, I guess. People around us knew it would happen. Kami, in denial pa. Now ito na, and I’m not scared. I’m not worried,” he said, before declaring for the last time: “She’s the one."