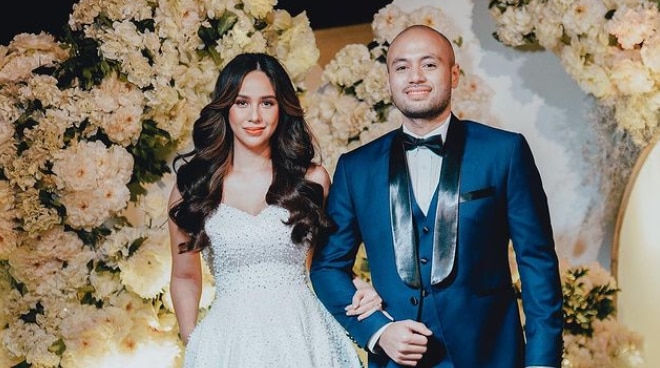 Newlyweds Empress Schuck and Vino Guingona opened up about becoming first-time parents in a recent interview.

In an interview for Star Magic’s segment on YouTube called “The Hows of Love,” the couple went on a trip down memory lane as they shared their love story weeks after getting married.

According to Vino, he instantly liked Empress the moment he saw her during the 18th birthday party of the Kapamilya star.

“Well, when I saw her the first time, I gatecrashed her 18th birthday. She was so pretty that night. I’ve never seen that beauty,” Vino said.

Empress, for her part, said she likewise got attracted to Vino because she found in him almost all the “qualifications” she’s looking in a guy.

Having married nearly six years after giving birth to their daughter Athalia, the two also opened up what they felt when they found out they were having a child.

“Scary siguro. At the same time, excited. Scary kasi bago palang kami with our relationship. It was a blessing din because of our parents, our Titos and Titas were supporting us,” Vino remarked.

“Iba na. We were having goals — family goals, marriage goals. Tapos how to move on in life, how to be a better parent,” Vino said.

Sharing what made them decide to finally marry each other, Empress said: “We started to join a bible study group. Our leader said ‘rate your relationship from 1 to 10’. I rated 9. And so, sabi ng leader namin, ‘Ano na lang ‘yung kulang to make it 10?’ And sabi ko, ‘I think marriage.’”

She went on: “Kasi that time, we were learning about the words of God, we were reading the bible every day. So that time, I realized, this is the perfect time. Now is the time to make everything right to the Lord and get his blessing. So yeah, I think that time du’n nakuha ni Vino ‘yung idea na it’s time to propose.”

Asked when he thought of popping the question to Empress, Vino said:  “Nu’ng birthday ni Athalia, actually wala akong plano nu’n to propose to her. On that day, September 27th, I woke up I just like this was it. This is the day. I called up ‘yung brother niya.”

He continued: “Sabi ko ‘Matthew, I think this is the day that i would propose to your sister. Okay lang sa’yo? What do you think of that idea?’ Sabi ng brother niya, ‘Sure, why not?’ Tapos tinawagan ko sister niya. The day before that proposal, I called her mom. Sabi ko, plano ko na mag-propose kay Empress.”

Empress and Vino tied the knot last March 7 in Tagaytay.

Meanwhile, it was in September 2015 when Empress gave birth to her daughter.