Did you know? Dionne Monsanto only spent P300 on her wedding dress 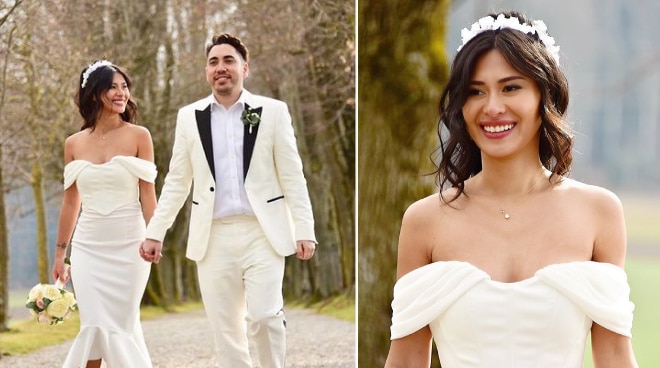 During the intimate ceremony, Dionne looked gorgeous in a white, off-the-shoulder wedding dress, which she revealed on Wednesday, March 17, only cost her P300.

Sharing photos of her wedding on Instagram, Dionne wrote: "I spent 300 pesos on my wedding dress! The bottom part of my dress is my Something Old. It was a thoughtful gift from my sister @travelfoodfinds a year ago. The corset top is something I bought from an online shop in the Philippines for less than Php 300."

"As I’ve gotten older, I realize more and more that things are just things," she said. "That I don’t need a lot to be happy. That love and respect from people I love are more important than any material possession."

Ahead of her wedding, Dionne, who is best known for her role in the ABS-CBN romance drama Tubig at Langis, announced her retirement from show business, saying she will be going to Switzerland to be with Ryan.

In her post, the former actress revealed that she and her now-husband have known each other since 2007, the same year she joined Pinoy Big Brother. However, they only started dating in 2018.

"11 years of knowing each other. Grateful that we were friends first and that we’ve seen each other grow. There’s no foundation better than friendship. Grateful that the universe gave me the kindest man ever. Here’s to forever + 49 years, my love @nayr_redlats," she said.