Sophie Albert and Vin Abrenica share first impressions of each other

Sophie Albert and Vin Abrenica shared their first impressions of each other in their latest vlog uploaded Sunday, March 14. 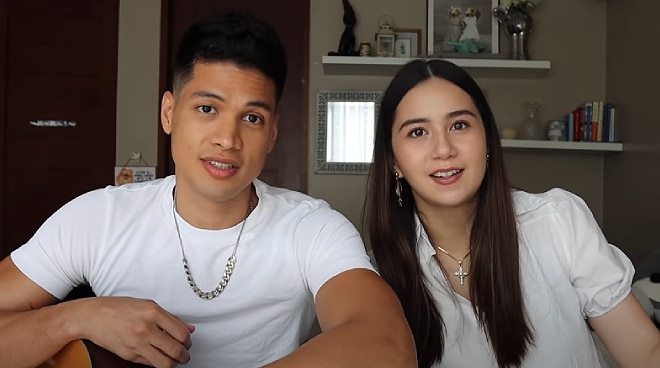 "Mayabang" was the impression Vin Abrenica made on his now-fiancée Sophie Albert when they first met almost nine years ago.

The couple shared their first impressions of each other in their latest vlog uploaded Sunday, March 14, where they answered questions sent in by their fans about their relationship.

"Kasi, one is that nung Artista Academy, siguro kung merong isang contestant doon that got the most attention, siya talaga 'yun. Like, from everybody. [He] was like the big deal there because... lahat parang bulung-bulungan na, 'Oh my God, si Vin Abrenica. Kapatid 'yun ni Aljur,' ganyan," she continued, referring to Vin's older brother, Aljur Abrenica, who is also an actor.

In his defense, Vin said he wouldn't deny that he got a lot of attention simply because he was the younger brother of Aljur.

LOOK: The Abrenica brothers are #BroGoals

Meanwhile, Vin admitted that his first impression of Sophie was that she is careless.

Shortly after they won Artista Academy, Sophie, 30, and Vin, 29, officially became a couple. In 2016, the two parted ways, but reconciled less than a year later.

Last month, Sophie and Vin announced that they are engaged to be married, and are expecting their first child together.

Sharing what he's grateful for to Sophie, Vin said: "I'm super thankful for you kasi right now, you're carrying our child and you're going through all the changes in your body. Especially before ka naging pregnant, we were at our peak, eh. Nasa peak tayo, like our fitness, super thin, kundisyon tayo, and you're willing to sacrifice lahat ng changes na mangyayari sa 'yo. Even for your career kasi maho-hold kasi you got pregnant."

The actor went on: "I'm thankful for that na this woman is strong, and hindi ko ma-imagine if that happens to me... Nakikita ko sa [iyo] na even when you're sleeping, you snore now. I see that also as a change in you, na you're going through that, building our child. So 'yun sa 'kin. Super thank you."

For her part, Sophie said he's grateful to Vin for being the one person she could depend on for anything.

"Me naman, I'm most thankful about Vin. I always wanted somebody who I could depend on and Vin is really the one person that I could really depend on for anything. He wants to be involved. He wants to be part of my everything. I know it's not the easiest thing to find somebody who's like a perfect match with you. Pareho kami ng trip, pareho kami ng mga gusto. Like even now, doing YouTube, I don't have to do it alone, I'm with him," she said.

"So parang everything, I don't ever feel like I have to face everything alone. It gives me a lot of strength and a lot of confidence and I feel like who I am becoming now is really because of my relationship with you," she added.