Vlogger Basel Manadil lamented on his YouTube vlog that his property was broken in by a man, who stole money and ransacked his shop. 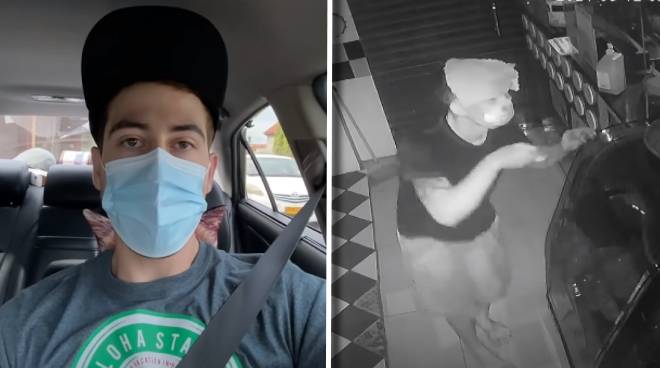 Basel Manadil, also known as The Hungry Syrian Wanderer, released a vlog narrating his experience after getting his restaurant got robbed last Friday, March 12.

On the same day the robber broke at his restaurant called YOLO Retro Diner, Basel released a vlog showing CCTV footage of the incident.

“Someone broke in our shop and stole I think the cash, stole some things, and then messed around in the shop, you know, and left,” he said.

Narrating what transpired while showing footage of the man acting on the scene, he said: “He has a flashlight with him, so he’s trying to figure out where to go. He went inside the counter. He goes straight step up on the ice machine, then twists the CCTV camera sa taas para wala siya view.”

READ: ‘I was betrayed’: The Hungry Syrian Wanderer exposes truth about Abeoji’s claims against him

He added: “So, he knows where he’s going. Then, he looks around with a flashlight. It’s like he’s trying to look around then he goes down to the cash drawer.”

“As you can see, he’s acting alone. I don’t know if someone’s waiting for him outside, but he went inside alone. He could have a watch out guy who’s standing outside the window,” he stated.

According to Basel, he is determined to catch the culprit because he doesn’t want other people to experience what he has gone through.

“I mean, the reason why I want this guy to be huli is just so it doesn’t happen to someone else. What he did, it’s not good,” he stated.

Police immediately acted on the matter after he reported it to them. It was found out that the robber went through the window.

Based in the Philippines, netizens have lauded The Hungry Syrian Wanderer numerous times for his acts of kindness towards Filipinos.