Piolo Pascual gives a tour of his house in Batangas: ‘I practically live here’ 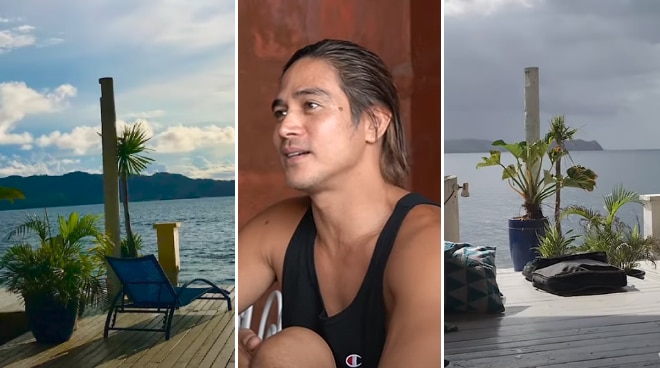 After the lockdown was announced one year ago, Piolo Pascual said he has been spending more and more time tending to his properties in Batangas where he is busy transforming a former dive resort into his new home. In an exclusive interview in the first of Dr. Vicki Belo’s two-part vlog of Piolo’s house tour posted last March 10, Piolo opened up his home to Vicki and her husband Hayden Kho where they arrived to see him doing hands on work on the property he calls Balay Rock.

“I live here. I practically live here. It’s a respite. Whenever I would think of going away, away from the lights, the busyness, the urban living. Here you see the beach, you see the mountains. I hike around. It’s all nature. You hear manok, goats, dogs. So it’s all nature. Walang WiFi. It’s more like a jungle nowadays because I’ve been trying to focus on nature. You know whatever is around you, amplify it by enhancing the look of the place, the plants, the trees. Then I put up a bird cage. then we have poultry. Then I’m cleaning the place up so I can plant more fruit-bearing trees,” Piolo told Vicki and Hayden in the vlog.

Piolo said that he loves the simple life in Batangas which is why he spends almost all of his free time there now.

“It’s nice. It’s so quiet, so serene, and so basic. I wake up before sunrise. We hike about two hours around the mountain. And then I get back mga around 7 am or before 7 am and then I work out upstairs or I swim and then I work the whole day until sundown. The reason why I’ve always wanted to be here is it’s quiet. It’s a drive away. You don’t have to fly. You don’t have to lock yourself in a room to have your privacy. Here you have it. I have areas where I can have quiet moments, my quiet time. I sleep out in the open. I sleep here on the deck. I just wanted something private,” he explained.

Unlike most people, Piolo said his experience doing quarantine last year had its silver linings.

“Not being insensitive, but I’m able to travel because of the regulations, because of the limitations. Like Bora, I’ve been there thrice already since last year. And then I was in El Nido, I was in Balesin. I just kind of enjoy going around the Philippines and enjoying it while it’s not as busy. I don’t mean to be insensitive, but because of that, yung pinapangarap kong bakasyon na time off, nangyari eh. Best quarantine ever. Andito ako nag-si-swimming. Wow sarap. The reason because I love the city is just because of work. Otherwise I’d live here. That’s why I live here because of that. I was just really married to my work,” he explained.

Currently enjoying activities like scuba diving and kayaking, the eco-friendly actor said he envisions the property to become an earth village and is personally designing everything on the property.

“Something sustainable. So we’re doing zero waste management compost recycling just to make it breathe on its own and live a sustainable life where you plant your own food, grow your own food, you have your poultry and your fish. Everything is just in a cycle.”

Aside from finishing two movie projects, Piolo said he’d rather work on his house more than spending his energies doing anything else right now.

The 44-year-old actor also shared with Vicki and Hayden the best insight he gained from provincial living since last year was to quiet down.

“You need to quiet down. It’s a matter of really appreciating everything around you. The simplest things in life are actually free and it’s one way to recharge. Yun naman talaga yun eh. Kasi lagi tayong on the go,” he added.