Both Marjorie and Dani Barretto expressed their happiness and support for Julia Barretto as they greeted her a happy birthday on Wednesday, March 10. 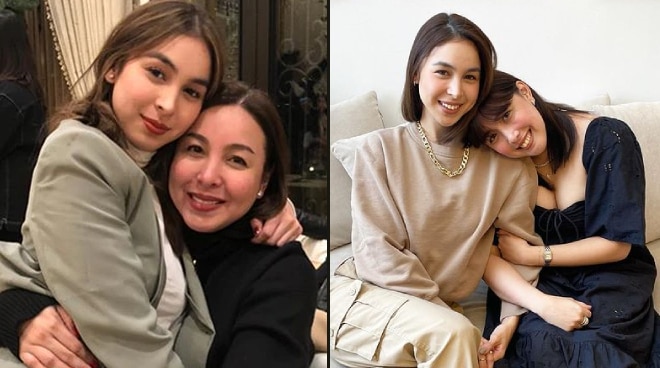 Among those who greeted the actress on her special day were her mother Marjorie and sister Dani.

In her birthday message for her daughter, Marjorie expressed her happiness for Julia and promised to always be there to support her.

"I feel this peace in my heart as we celebrate your birthday today," she wrote. "I feel your happiness, Jul. The happiest I have seen you in years. And that is my answered prayer.

"For always and forever you have me, behind and beside you. Happy birthday to my daughter, my friend, my heart and my life. We love you so much," she added.

Likewise, Dani said seeing Julia at her happiest makes her heart happy, as that's all she's ever wanted for her sister.

She also thanked Julia for being an amazing daughter to their mom, sister to her, and aunt to her daughter Millie.

Sharing her birthday wish for her sister, Dani said: "May this year bring you more blessings and never ending happiness. I’ll always be here for you no matter what. I love you so so so much!"

Aside from Marjorie and Dani, Julia's boyfriend Gerald Anderson also took to social media to share his birthday greeting for the actress.

He posted a photo of Julia at the beach and in the caption wrote: "Happy birthday," along with the hashtag #YouAreABlessing.

It was just last week when Gerald finally confirmed their relationship after more than a year of being romantically linked together. In a one-on-one interview with host Boy Abunda that was broadcast Friday, March 5, the actor admitted that currently, he is happy because of Julia.

The two, who co-starred in the Black Sheep movie Between Maybes, first sparked rumors of a romance in mid-2019, amid the actor's controversial breakup with his former girlfriend, actress Bea Alonzo.

Following their admission, Gerald and Julia made their first public appearance together on Saturday, March 6, as they spearheaded a relief operation in Barangay San Agustin in Iba, Zambales to mark the actor's 32nd birthday.