Bea Alonzo admits that she always thought she was the marrying type. 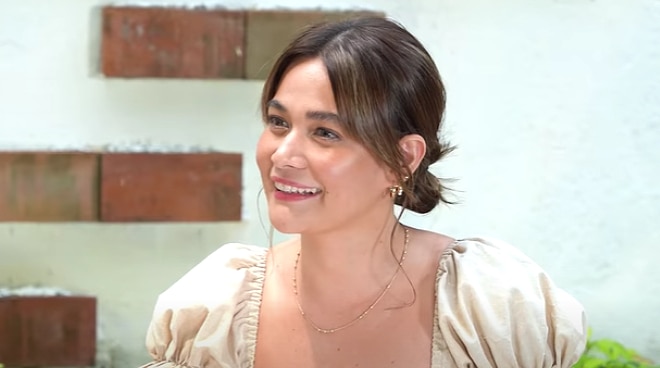 ASo, I had dinner with this guy, and I decided to film it. Buti na lang I did, because now, I can finally share with

you how much fun I have whenever I would hang out with him. We always have the most interesting conversations," Bea said in her vlog.

Bea and Ian discussed a variety of topics from career, parenting, and relationships.

One of the questions that Ian asked Bea was how she is as a girlfriend.

ake me question the relationship because it should be effortless.”

The actress disagreed on what Ian said and highlighted that at some point a relationship would require tons of hard work.

“Sa umpisa effortless but at some point there has to be some sort of an effort to make it work. Relationships are hard work,” Bea said.

Meanwhile, Bea asked Ian if he ever regretted marrying at a young age.

The Kapamilya actress also asked Ian, “Do you think I should get married?”

“No, I think you should have a kid [but not get married],” Ian replied.

Bea then replied, “Dati pangarap ko lang naman at 28 to get married and have children tapos ngayon lahat ng peers ko, lahat sila about to get married, or they have their kids. ‘Pag-iniisip ko, I wouldn’t have guessed na ako ‘yung huling mababakante. I always thought that I am the marrying type.”

Ian then told Bea that she really seems the marrying type but he thinks marriage will not enhance the quality of her life.

“Ako I’m saying this with the utmost sincerity and care for you, I really think that a child would improve the quality of your life, a marriage wouldn't, based on what I know lang about you and how I know you,” Ian said.

But Bea insisted that she wants to have a partner in life.

“I want to have a partner in life. I want to have someone to be there, build a life with. Actually I just want a boring family life,” Bea stated.

For months now, Bea has been rumored to be dating Dominic Roque.

Recently, netizens speculated that they went to Amanpulo together.

Bea and Dominic have yet to confirm the rumors.