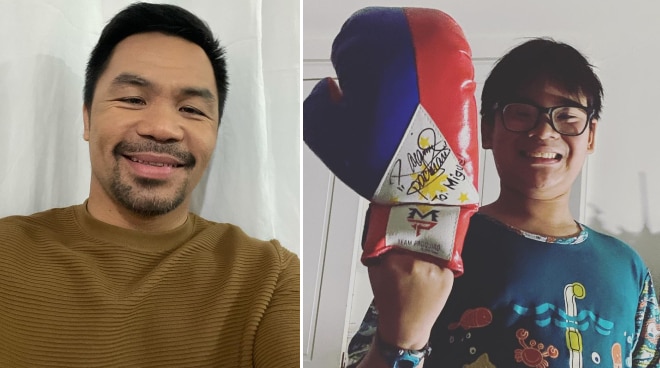 On Instagram, Sharon posted photos of Miguel holding up a signed boxing glove from his "ninong" Manny.

"My son Miguel is over the moon right now! His godfather/ninong Sen. Manny Pacquiao sent him his promised autographed boxing glove!" she wrote in the caption.

"Thanks so much for making my son so happy! We love you!!!" she added.

Miguel, 11, is the adopted child of Sharon and her husband, Sen. Francis "Kiko" Pangilinan.

In a July 2019 vlog, Sharon revealed that Miguel was put up for adoption by his biological mother when he was only one-day old as she couldn't afford to keep him.

"When someone said that there was a baby, it was a boy, hindi na ako nag-isip nang dalawang beses. I didn’t even see a picture of him. Hindi ko alam kung may diprensya siya, kung hindi sampu ‘yung daliri niya. I didn’t even ask,” she said.

“Ang akin was it was the right time kasi I was shooting ‘Mano Po’ and ‘yung anak ko doon na baby, patay na patay ako sa kanya. I really said na, ‘Sana akin na lang ‘tong baby.’ I was ready for a baby boy. So when someone said that there was a little boy, sabi ko lang, ‘That’s my son’,” she added.

When Miguel came, Sharon said she and her husband fell in love with him right away.

“I was happy to know that he didn’t have any problems. Not so much dahil sa amin, kasi kaya naming panindigan ‘yun, pero ‘yung siya mismo. Na habang lumalaki siya, everything was right, physically and all. As it turns out, now, he really brings us so much joy," she said.