MMFF entry ‘The Boy Foretold by The Stars’ to continue as limited series. 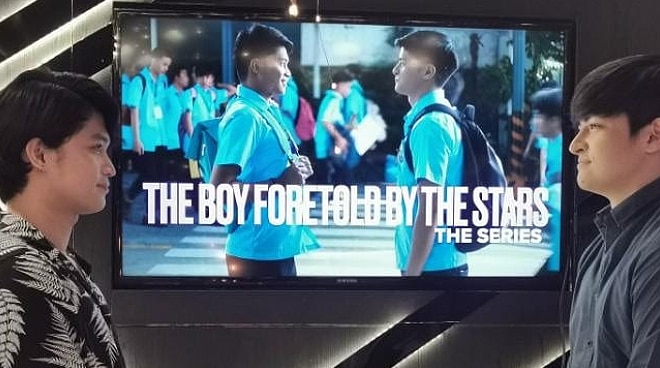 The Metro Manila Film Festival entry The Boy Foretold by The Stars will continue as an ABS-CBN limited series, Dreamscape Entertainment announced on Tuesday, February 2.

Adrian Lindayag and Keann Johnson will reprise their roles as high school students Dominic and Luke in the sequel, which will be co-produced by Clever Minds. Meanwhile, Dolly Dulu will also return as director.

"The love story of Luke and Dominic continues! ... Coming soon!" Dreamscape said in a tweet.

The love story of Luke and Dominic continues! 🌈 The Boy Foretold by the Stars The Series starring @adrianlindayag @TheKeannEffect Directed by @dolliefication coming soon! From @ABSCBN @clevermindsinc and @DreamscapePH 🌟 pic.twitter.com/thfIJkb7Ye

No further details about the series were given.

Billed as the first Filipino boys' love (BL) movie, The Boy Foretold by The Stars tells the story of two senior high school boys, who, through the help of a fortune teller, find each other at an optional school retreat called Journey with the Lord.

Currently, The Boy Foretold by the Stars is available for streaming on the ABS-CBN platforms KTX.ph, iWant TFC, and TFC IPTV.