Catriona Gray said that she hopes to do a non-pageantry related show with Pia Wurtzbach. 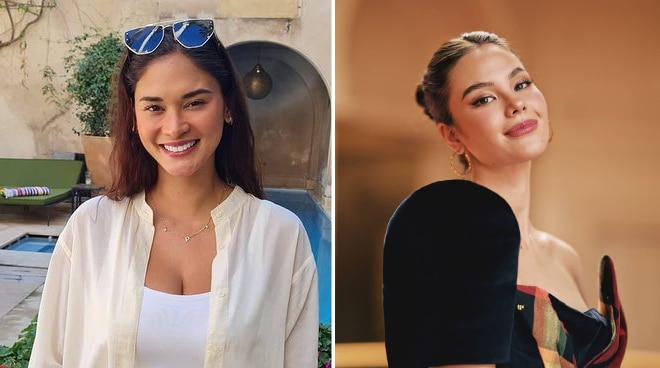 If ever she would do a show with fellow Miss Universe winner Pia Wurtzbach, Catriona Gray said that she hopes that it would be something that's non-pageantry related.

In an interview with G3 San Diego, Catriona remarked that she hopes to do a show about adventure sport or something completely different with Pia.

“It’s given that we are Miss Universes. It would be nice to see us do something that people wouldn’t expect,” she said.

“It could be like adventure sports or something. I don’t know if Pia is into that kind of stuff but yes, that would be fun. ‘Di ba si Cardi B had this show where she tried so many random things? Maybe something like that. I don’t know," she stated.

Pia won the Miss Universe crown in 2015 while Catriona bagged the title in 2018. Both beauty queens have worked together at events but not for a television show yet.

Meanwhile, when it comes to her own career, Catriona said that she wants to pursue music even further.

“I know that I’m a talker so hosting is definitely something that I’m interested in pursuing but there is a different calling that I feel with music. I felt it ever since I was young,” she relayed.

READ: Catriona Gray shares the qualities she admires most about boyfriend Sam Milby

Catriona shared that she hopes to release the songs she wrote herself in the future.

"That’s really what I would love to pursue because it gives me joy. I am millennial when I want to orientate my job from what I love and what I am passionate about,” she stated.