‘The Boy Foretold by the Stars’ is looking for a third actor who will join Adrian Lindayag and Keann Johnson in the movie’s much-awaited sequel. 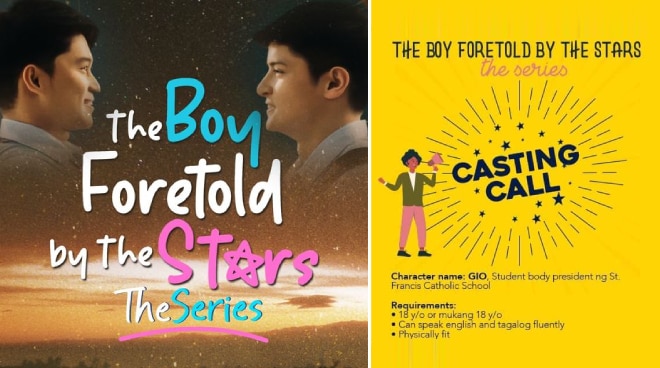 The producer of The Boy Foretold by the Stars has announced a casting call for a third actor who will join Adrian Lindayag and Keann Johnson in the movie's much-awaited sequel.

Based on the announcement, the follow-up will introduce a new character, Gio, who is described as a student body president of St. Francis Catholic School.


Requirements for the role include being 18 years old or at least resembling an 18-year-old, able to speak Filipino and English fluently, and physically fit.

Interested applicants can submit their resume, close up and full body photo, and acting reel, or a 30-second video introducing themselves and their acting background to the email address boyforetold@gmail.com.

Deadline for the submissions is on February 21, 2021. Shortlisted applicants will be e-mailed for a call back.

Directed by Dolly Dulu, The Boy Foretold by The Stars tells the story of two senior high school boys, who, through the help of a fortune teller, find each other at an optional school retreat called Journey with the Lord.

A sequel for the movie—a limited series co-produced by Clever Minds and ABS-CBN's Dreamscape—was announced in early February. However, no further details about the project were given.

READ: MMFF entry ‘The Boy Foretold by The Stars’ to continue as limited series