Here's good news for fans of Sarah Geronimo: The singer-actress is set to release a film concert this March. 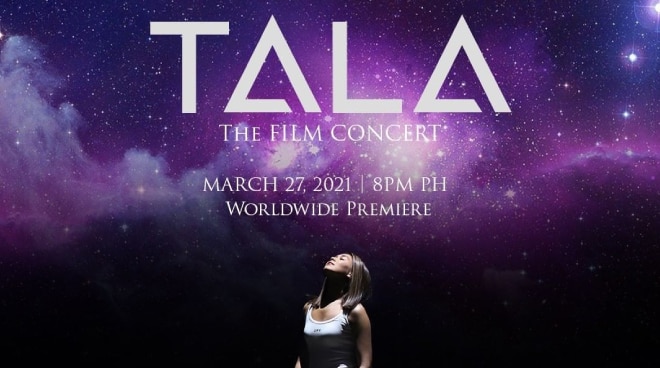 Here's good news for all fans of Sarah Geronimo: The singer-actress is set to release a film concert this March.

Simply titled Tala, the concert will premiere on March 27 at 8 p.m. on KTX.ph and iWantTFC.

Tickets priced at P1,500 for regular viewers, and P3,000 for VVIPs start selling this Friday, February 19.

Director Paul Basinillo recently talked with ABS-CBN News about the film concert, which was shot at the Araneta Coliseum.

“We shot for three days. Live ang tugtugan with Louie Ocampo, choreography by Georcelle of G-Force. Sarah herself enjoyed the experience because the venue is familiar to her as well as the people she worked with. The band members, na-handpick niya, the dancers, vocal support. Nothing was lost in terms of a real concert experience,” he said.

The music video-driven show is expected to feature Sarah's new take on her hit singles “Kilometro,” “Ikot-ikot” and “Isa Pang Araw," as well as her reimagined version of Rico Blanco’s “Your Universe."

According to Paul, the Popstar Royalty will also perform an explosive number where she will be doing a surprise stunt.

Paul, who directed six concerts of Sarah, including her last solo show “This is Me,” shared that the two-hour film concert will have a narrative style, inspired by the Netflix concerts of superstars Beyonce and Justin Bieber.

Tala, named after Sarah's hit single, is seen as the pop superstar's big stage comeback after her joint concert with Regine Velasquez, Unified, in February 2020.

Aside from the concert, Viva Records has also announced the production of Sarah's new album this year.