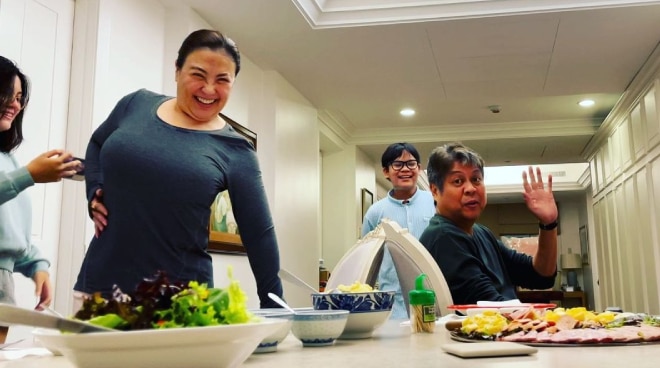 Sharon Cuneta and Kiko Pangilinan’s children Kakie, Miel, and Miguel came up with a game that tested how well they know each other.

Called “ShaKo,” the game is similar to “Who’s Who” only Kiko and Sharon were required to choose only between Sha (You) or Ko (Me) each time they answer a question.

“So Kakie, Miel, and Miguel came up with this idea. We always enjoy our regular dinners because we talk and laugh a lot between bites and bond as a family. But tonight’s extra special! This is just before dinner tonight,” Sharon wrote in the caption of the video.

One of the questions asked was who between them was more “old soul.”

“Of course, I’m modern. I’m a bit conservative, but I’m not a prude. But I feel like since I was little, I was born an old soul, an old person. I’m very responsible. Like you [Kakie], very manang when I was a little girl,” Sharon said.

When asked about who between them has better taste in music, Sharon, a singer, said would naturally be her.

“You father likes the songs of old or dead people,” the Megastar told daughter Frankie.

READ: Sharon Cuneta shares the gift she received from Kiko Pangilinan on their 24th wedding anniversary

“But I think the argument can be made that Daddy has the best taste in music because his wife is you,” Kakie responded to her mom.

“And I had a musical show wherein I had to study a million songs. So I know all genres and I can do all,” Sharon added.

Sharon and Kiko also took a trip down memory lane. Asked by son Miguel who visited the other’s house first before they were married, Sharon said: “[He sent a lot of food] even to tatay and mita, he sent live hito, live dalag.”

She added: ”He knew what my dad wants. And he sent me — while other were sending me bulaklak — he sent me chicharon bulaklak. I knew he was going to marry him.”

Meanwhile, Kakie also shared a time when her mom — who doesn’t drink alcohol — got tipsy.

Sharon and Kiko celebrated their 25th wedding anniversary as well as their 27th Valentine’s Day together this year.