Bryan Santos and Marlann Flores get engaged on Valentine’s day: ‘My best friend is now my fiancé!’

Longtime couple Bryan Santos and Marlann Flores have officially taken their relationship to the next level. 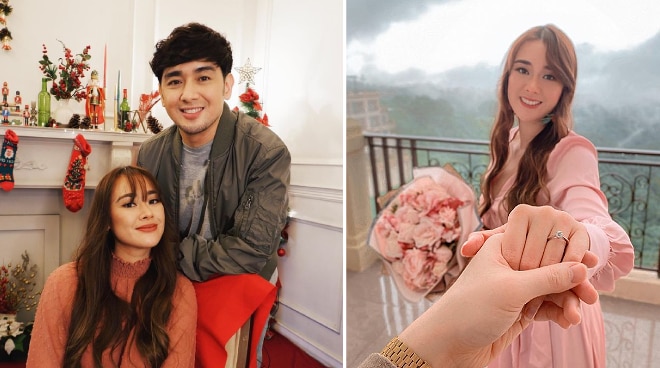 Bryan and Marlann first met and worked together on the set of the Kapamilya series Imortal in 2011, their characters Gael and Olive ended up being paired together onscreen and the two started going out shortly after the show ended.

After accepting Bryan’s proposal, Marlann shared a photo of herself holding a bouquet of flowers and her new engagement ring on her Instagram account.

My best friend is now my fiancé! It feels surreal... Somebody pinch me!!! I love you so much, @bryanjsantos_! You are my answered prayer. God's timing is indeed perfect!

And so the adventure begins...

The 28-year-old actress, who was part of Star Cinema films like My Perfect You, Maybe This Time, and No Other Woman, also gave thanks to God for keeping her relationship strong with Bryan all these years. In a previous post, she wrote, “He has made everything beautiful in its time... Praise God from whom all blessings flow. ♥️ My lobster… for life, @bryanjsantos_”

Bryan is known as the nephew of former ABS-CBN President Charo Santos-Concio and Star Cinema head Malou Santos. After joining showbiz as part of the cast of Imortal, he became part of the all-male singing group Harana until 2018. Before she started acting, Marlann won the title of Ms. Teen Earth Philippines 2008. She then went to Singapore the following year where she clinched the Ms. Teen Earth International title. She joined showbiz as part of the cast of Gimik 2010.