Bubs & Doe turned emotional over the words that came from Regine Velasquez-Alcasid herself. 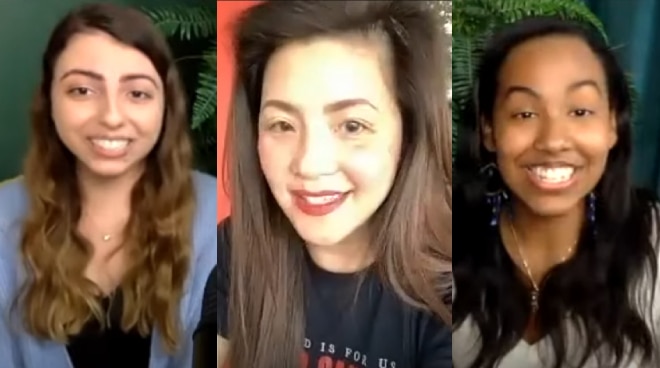 YouTuber duo Bubs & Doe couldn’t help but fangirl over Asia’s Songbird Regine Velasquez-Alcasid who recently did an interview with them for their YouTube channel.

Best known to their Pinoys fans for reacting to videos of performances from Filipino artists such as Morissette and KZ, the duo was at a loss for words over the Kapamilya singer's presence.

“We don’t have any words right now. We’re a little bit speechless,” Bubs said at the beginning of the video.

According to Regine, she didn’t know she would be getting interviewed by two girls who are from outside the country. So, the veteran singer asked the two girls how they found out about her music.

“Funny enough story, we have a YouTube channel, we do a lot of reactions to other artists. And our lovely viewers are the ones who told us about you and told us to react to some of your songs. And let us tell you, the one that we did …,” Bubs said.

Meanwhile, Regine thanked the two girls for allowing her music to reach thousands of around the world through their YouTube channel.

“First of all, I just want to say thank you to both of you. I feel so happy that you young girls actually appreciate the kind of music that I do. So, thank you. Thank you very much. And also, by doing these reaction videos, you are actually helping Filipino artists like me to be exposed. So thank you, I appreciate that very much,” Regine said.

But according to Bubs, she considers the community they’ve created on YouTube as a family rather than simply a mere audience.

“You know, it’s honestly been a blessing the audience that we’ve gathered through our YouTube channel. It’s more of a family we’ve created. And they’ve introduced as to a whole bunch of artists and we’re blown away, you know,” Bubs stated.

“That’s amazing coming from you. I’m like on cloud nine, Regine. This is such an honor to hear you say that,” Doe added.

Expressing her gratitude to the two girls for the inspiring work that they do for their community online, Regine said: “I wanted to tell you guys, this pandemic, we’re still going through it — what you’re doing, you’re actually inspiring people. Sometimes, when you do a show, like me, I do a show. I sing. In my head, I think it’s a job.”

Regine added: “But from the people who are watching us, we’re actually able to give them hope, sometimes even make them laugh a little bit and make them forget what’s happening in the world, inspiring them. That’s wonderful. So, keeping doing what you do because for sure, you’re touching a lot of hearts. Not only that, you’re helping Filipino artists.”

Honored by the words that came from Regine herself, Doe said: “I’m on the verge of tears right now. I’m getting emotional. That means [a lot]. You don’t understand how much that means. And the fact that I feel like this true obligation to get OPM and Filipino artists out there after we’ve gotten such an audience. I was like woah, we need to do something with it. It can’t be just about us.”

“The love and support we get from them are what fuels us. It’s a two-way thing. Like they comment that we’re making their day better. They’re making our days better especially 2020,” Bubs added.

Regine appeared on Bubs & Doe’s YouTube channel in preparation for her upcoming concert Freedom which was just postponed due to health concerns.