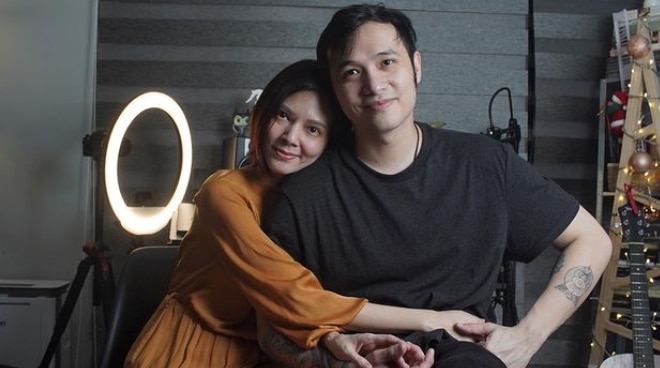 It’s been three years since they started their production company OC Records and celebrity couple Kean Cipriano and Chynna Ortaleza revealed how it really feels to work with your spouse daily.

“It’s f**ked up. Really honestly, I don’t know what the f**k happens in the process. It’s so overwhelming at times because being a mom is demanding. But then of course you have to balance things like you have an artist husband, you’re a muse to him. And after that you’re working in a label with so many artists with conflicting egos and everything. So, what I do is I just soldier on. That’s what I do. I voice out all energies, good and bad. My team knows this. I’m transparent with them if I’m pissed, I’ll cry it out. If I’m happy I’m super happy. That’s just how I deal with it to be able to get that balance that we need for the artists and also working as a team. And so far, we haven’t filed for divorce or annulment so I guess that’s a good thing (laughs),” she shared during the OC Records virtual presscon.

READ: Chynna Ortaleza shares why she is proud of daughter Stellar

WATCH: Chynna Ortaleza looks back at her relationship with Kean Cipriano

Chynna fully agreed with plans to focus on their two kids Stellar and Salem this year. “It’s not yet possible at the moment. We don’t want baby number three okay no. Safe ako. Marked safe ako ng 2020 (laughs). Sa Valentine’s masahe lang masaya na ako. Yung hashtag namin nung nagpakasal kami pretty much that’s how we are as a couple. We say, ‘Til death we do art.’ So, we carry that sa lahat ng ginagawa namin pati sa record label. So, we’re just going to keep on doing this until ma-permit kami,” she added.