Sofia Andres took to social media to share an adorable snap of Marian Rivera with her daughter Zoe. 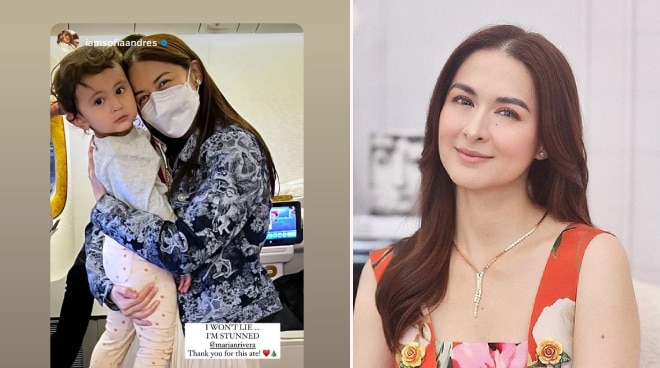 Sofia Andres took to social media to share an adorable snap of Marian Rivera with her daughter Zoe.

The La Vida Lena actress shared the photo on Instagram Stories on Wednesday, December 8, with the caption, "I WON'T LIE... I'M STUNNED."

Tagging Marian, she said, "Thank you for this, ate!" Going by their updates, the snap was taken when Sofia and her family were en route to Madrid, and Marian to Israel for the upcoming Miss Universe pageant.

Marian, 37, has been tapped to judge the prestigious pageant as it celebrates its 70th anniversary this year. The actress was officially introduced as part of the all-female selection committee on Wednesday, December 8, alongside the likes of supermodel Adriana Lima, Bollywood actress Urvashia Rautela, and Miss Universe 2016 Iris Mittenaere.

She arrived in Israel with her husband, actor Dingdong Dantes, and her glam team early this week. In a recent interview, the actress expressed her gratitude over being handpicked by the Miss Universe committee to be part of the highly anticipated pageant.

She also addressed those who questioned her credentials as a judge of the prestigious pageant.