Francine Diaz hits a milestone on YouTube as her channel reached one million subscribers. 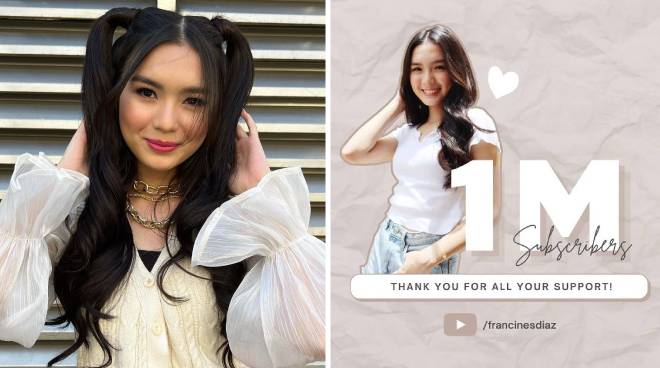 Kapamilya actress Francine Diaz has hit the one million mark with her subscribers on her YouTube channel.

She posted her appreciation for her fans on her Instagram account on Tuesday, December 7, thanking everyone who supported her journey on the channel.

“Sobrang grateful ko po sa inyong lahat for supporting #SimplyFrancine since our launch last July 24. In just a few months, we’ve reached a milestone. 1M subscribers on my YouTube channel.  Wow. THANK YOU everyone. Sa lahat ng pumayag ko po maka-collab, kay sir John and tita Nenette who encouraged me to start vlogging again, to my whole family and to my digital team, the best kayo. Maraming Salamat!” she wrote.

Her Vlog #SimplyFrancine only started last July 24, 2021, and the number of subscribers has been continuing to grow. Now the channel has a total of one million subscribers after posting 22 videos.

Her latest vlog challenges her babysitting skills as she became a yaya for Scarlet Snow, the daughter of Dr. Vicki Belo and Dr. Hayden Kho.

Francine is also part of The Gold Squad YouTube channel.

—from a report by Rommel Manuzon