Actress and philanthropist Angel Locsin gave away P20,000 to a lucky netizen from Cebu as an early Christmas gift. 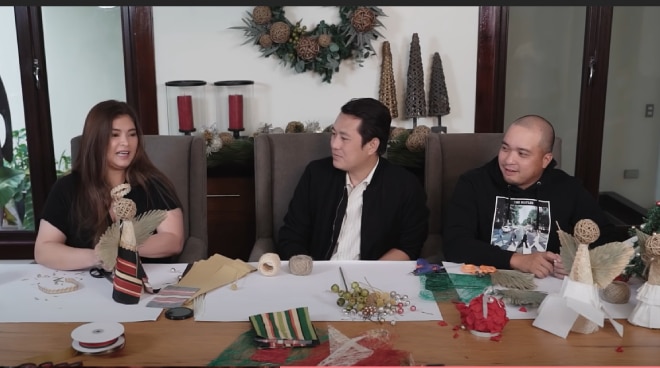 Photo credits to @The Angel and Neil Channel on youtube

Actress and philanthropist Angel Locsin gave away P20,000 to a lucky netizen from Cebu as an early Christmas gift.

The Cebuana, named Jenalene Gaviola Dolloso, was among the dozens of netizens who commented on the December 2 vlog of Angel and her husband, Neil Arce, where they featured their good friend and top event stylist Randy Lazaro.

In the vlog, Randy helped the couple style their 12-year-old Christmas tree using upcycled decor and do-it-yourself arrangements. At one point in the video, the stylist was asked to share his fondest memory of Christmas from when he was still living in the province with his family.

Angel then asked him whether she and Neil were being insensitive by showing everyone that they're celebrating Christmas at a time when many Filipinos are struggling due to the COVID-19 pandemic.

Later in the vlog, Angel told those who could relate to Randy's story to leave a comment in the box below. She said she and Neil would choose one lucky netizen who would receive a cash gift from their team as a Christmas treat.

In her recent Instagram update, Angel admitted that she felt rather insensitive knowing that while she and Neil were decorating their home for Christmas, "there is someone who might not be able to celebrate [the holidays] this year."

"Don’t get me wrong, I am not saying we shouldn’t celebrate or share our Christmas preparations. I’m a sucker for celebrations and I believe everyone should be rejoicing the birth of Jesus Christ. That is why I wanted to somehow help make someone else’s Christmas a bit merrier. Na kahit isang pamilya lang, maramdaman nila ang diwa ng Pasko at maipaalala sa kanila na buhay ang Christmas miracle. And this person doesn’t need to be a subscriber. Just the first person na nabasa ko ang comment at kwento. And we found her," she said.

She then congratulated and greeted Dolloso a "Merry Christmas" on behalf of The Angel and Neil Channel team.

Aside from her body of work as an actress, Angel, 36, is known for her philanthropic deeds; for showing compassion and sharing her blessings with the less fortunate regardless of the occasion. During the COVID-19 pandemic especially, the Kapamilya star has been active in extending a helping hand towards vulnerable members of the community.

“I’m nowhere near from being a billionaire," she said in 2019, when she was listed by Forbes Asia as among the region's "Heroes of Philanthrophy", alongside the likes of Filipino businessman Hans Sy and Chinese tycoon Jack Ma. "But I try my best to do my part in my own little way. I hope this would inspire other people to help as well."