SB19 is the first-ever act to dethrone BTS from the Hot Trending Songs chart. 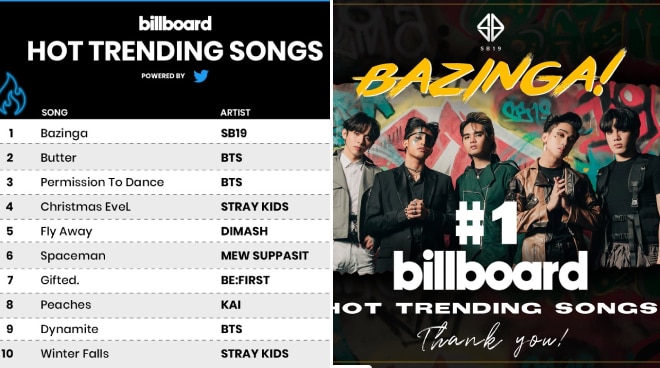 BTS had been no. 1 in the newly-introduced chart for six weeks until SB19 took over the spot — making the five-piece Filipino group the first-ever act to do so. Thus, a first not just for the Phillippines but also for Southeast Asia.

The chart is powered by Twitter, with the local hitmakers garnering 1.5 million Twitter mentions from November 26 to December 2, 2021.

“Bazinga” was released in July as part of SB19’s album Pagsibol, but it was only in November when the group released the music video.

SB19 took to social media to thank fans for helping them dominate the charts, saying: “Wow! Thank you A'TIN for bringing us to the Top Spot on the @billboard #HotTrendingSongs!”

Wow! Thank you A'TIN for bringing us to the Top Spot on the @billboard #HotTrendingSongs !

Meanwhile, SB19’s third-anniversary concert will have an exclusive cinema screening at the Gateway Cineplex on December 18 and 19 for both days 1 and 2 of their concert.