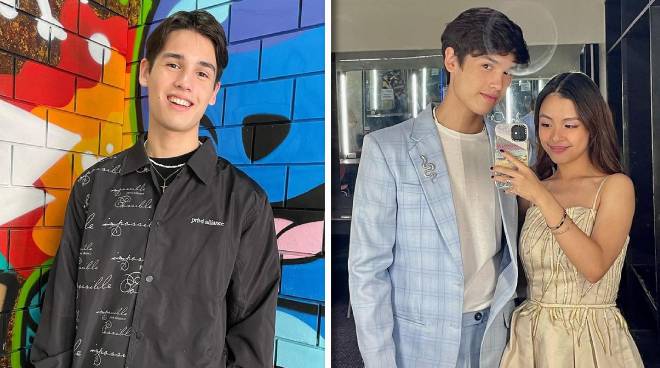 From being a teen housemate on Pinoy Big Brother: Connect to being part of iQiyi’s pilot project with ABS-CBN Entertainment Saying Goodbye, new actor Kobie Brown said he is proud to have been chosen to be part of the cast along with fellow PBB alumni and new love team partner Andi Abaya.

“So this is actually our first project together but I think this one is really special to me. To be doing the first Filipino original series for iQiyi is such a great opportunity for me and I’m happy that I got to work with Andi dahil alam ko sobrang talented siya. And I did learn a lot from her. I can learn a lot from here. When we were working together it was very smooth,” he said.

The 17-year-old actor shared what his first acting role is all about and how he prepared for his first day on the set.

“I’m playing the character of Vic who is the best friend of Ricky, Seth Fedelin’s character. He has something with Andi Abaya’s character. Si Vic is a very awkward guy. He’s new sa Pampanga. He goes there to live his life to the fullest because he has a heart disease actually and that’s where he meets Ricky. I believe you always have to be prepared before going to the set. It’s my first project so I didn’t want to make myself look bad or anything. I wanted to do my best.  When I was there sa set, it just all flowed perfectly. At first I was looking around everywhere. I didn’t know what to do. But then everyone made me feel comfortable. The staff were very helpful. The other artists were very helpful to me. So that’s something I learned, to just go with the flow,” he admitted.

From joining showbiz officially as one of the newest members of Squad Plus earlier this year, Kobie shared how he believes he has matured as a person after doing Saying Goodbye.

“When I first came on the set, marami akong naiisip. I was thinking what if I don’t do so well? And it was making me so nervous when I came to do the set. Siguro I’ve matured because I don’t think about that anymore. I just try to focus on what I’m doing. I’m focused on my lines, I’m focused on how I’m going to portray this character. So this project really helped a lot. Si direk (Dolly Dulu) she really helped me so much. Minsan she’d bring me to the side and just give me talks and it would make me feel more comfortable. As a pair, I think me and Andi matured together. This is our first project. I learned so much from Andi because I know she’s had more experience than me. Minsan when we have free time we just practice with each other. She would really help me when it comes to delivering my lines and everything. And I think this project made us become even more comfortable with each other,” he shared.

Kobie said viewers can also learn a lot of lessons about love from watching their new series.