Liza Soberano, Enrique Gil celebrate Christmas 2021 together in the US

Real-life couple Liza Soberano and Enrique Gil once again celebrated the holidays together, this time with the actress's relatives in the United States. 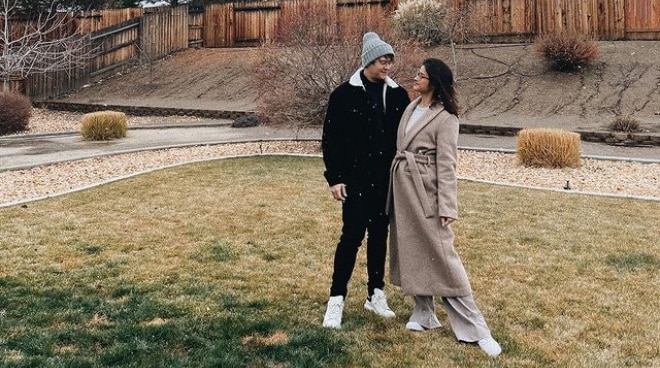 Real-life couple Liza Soberano and Enrique Gil once again celebrated the holidays together, this time with the actress's relatives in the United States.

On Instagram, Liza shared some snaps of her family's celebration with Enrique, including a few clips of them together enjoying the snow in the US.

Last year, Liza and Enrique also celebrated the holidays together in the Philippines along with their respective families.

The pair, who are collectively known as LizQuen, confirmed being in a romantic relationship in early 2019. They celebrated their seventh anniversary as a couple last October.

Meanwhile, Liza earlier shared that she was supposed to celebrate Christmas with her family in their newly renovated home in the Philippines.

"Happy Holidays. Really missing my family back home in the PH. It was supposed to be our first time celebrating in our newly renovated home but we’re still thankful we get to celebrate together via video call," she said in her previous post.

Liza has been in the US with Enrique since earlier this month. They flew there after the actress received a call from her relatives about her great grandmother's condition, hence their noticeable absence from the ABS-CBN Christmas Special this year.

READ: Liza Soberano shares why she was not able to attend the ABS-CBN Christmas Special

"Hello everyone! As much as @itsenriquegil and I would’ve loved to be at the ABS-CBN Christmas Special this year, we won’t be able to make it due to unforeseen circumstances. We really wanted to be there for all of you and we were ecstatic to see our Kapamilya whom we missed dearly," wrote Liza in a tweet.

"Actually we were just at ABS-CBN yesterday recording for tonight’s event. I received a call from my family in the States yesterday right after recording and I was told that my great grandma Bobbie wasn’t doing so well."

According to Liza, her grandmother Bobbie was one of the few people who raised her when she was growing up in America.

"And I wouldn’t miss being with her during tough times for the world," she said. "Please include her and the rest of our family in your prayers. Thank you so much for understanding. Love you all."