Sharon Cuneta took to social media to greet her fellow actress and good friend Lorna Tolentino, who is celebrating her 60th birthday. 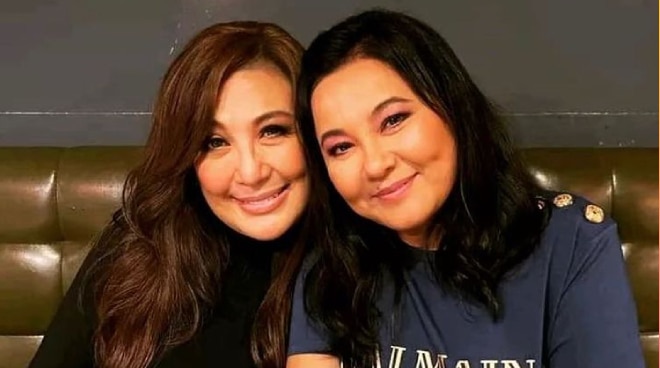 Sharon Cuneta took to social media to greet her fellow actress and good friend Lorna Tolentino, who is celebrating her 60th birthday this Thursday, December 23.

On Instagram, Sharon shared a photo of herself with Lorna, along with her touching message for her "ate LT."

"Happy, happy birthday tomorrow, my dearest Ate LT! Thank you for your true and reliable friendship over these many years. I treasure you. I love you very much. May all your dreams come true and God bless you always!" she said.

Sharon and Lorna have been friends for a long time. They first became close when they co-starred in the 1986 movie Nakagapos Na Puso as sisters Elaine and Elisa who are caught in a rivalry.

Sharon has time and again called Lorna as her older sister and one of her true friends in showbiz.

"Lorna has been my 'Ate' since we made our one and only movie together, 'Nakagapos na Puso.' But we have become closer in recent years, especially when Daboy was sick and we talked more, kept in touch through texting, saw each other a bit more often," she said in a previous Facebook post.

"Daboy" is Rudy Fernandez, the late husband of Lorna and Sharon's leading man in the 1993 movie Kung Kailangan Mo Ako. He passed away in June 2008 due to periampullary cancer.

"We may not have been able to open up and make kuwento too much to each other about our own lives, but she is someone I will always look up to, and I sincerely love her very dearly," Sharon said of Lorna. "She is a true friend and a loving Ate. If we both had the time and many opportunities, I know that we would only become closer and be able to share more with each other! And I will always treasure Ate's friendship and love."

Recently, the two actresses were reunited when Sharon joined the cast of ABS-CBN's long-running action-series FPJ's Ang Probinsyano , which Lorna has been part of since 2019.

At the time, Sharon said she looked forward to doing a scene with Lorna, noting that it has been such a long time since they did Nakagapos Na Puso.