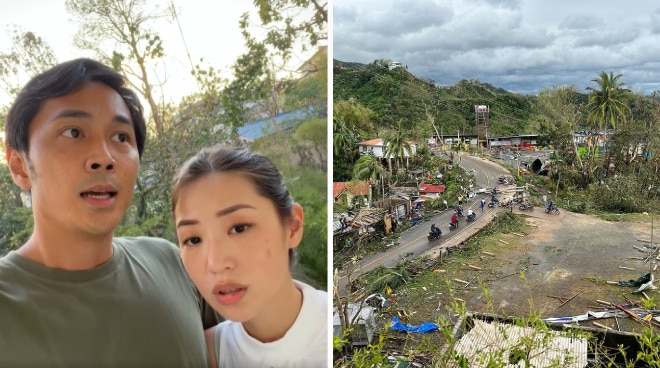 Slater Young and Kryz Uy took to social media to further raise awareness about the situation in Cebu following the onslaught of typhoon Odette.

"I don't think Cebu's getting heard or the rest of the victims of typhoon Odette because you don't see a lot of pictures on how bad it really is here," Slater said in the video he posted on his Instagram page alongside with his wife Kryz.

Slater relayed that communication lines in Cebu right now have all been down.

"It's very hard to call people. I can't call our family members. A lot of people are asking us for help, it's again... it is very hard to coordinate with people," he said.

Slater also shared that water and gas have been scarce in Cebu in the aftermath of the typhoon.

"Kami we are thankful we are safe but a lot of people out there, when we are driving, it takes four hours to get gas, it takes 3 to 4 hours just to get drinking water... if it's available," he said.

He added, "Some of our friends na merong bahay, can afford to live in a good house nahihirapan na nga kumuha ng tubig eh so how much more all the other people here in Cebu."

The couple also relayed that they have friends and loved ones who lost their houses because of the typhoon.

Kryz remarked that Cebu is in a critical state which they believed is not being reflected in the news.

"We don't know what information is being put out there because we don't have access to the net.  Based on what we hear from our friends, nobody knows what's going on here... in the news it's 260kph, iyon lang 'yung wind. It's actually 400 plus. Everything broke, everything's a wreck. Things are exploding. The whole city, it's a city, but it's a wreck," Kryz stated.

Slater urged their followers to spread awareness about what's happening in Cebu and send help to the victims of the typhoon. "Get the word out there guys, people need help. We will do what we can. I think it's our job [since] people [are] following us, at least we can get our voice out there that people really need help," he said.