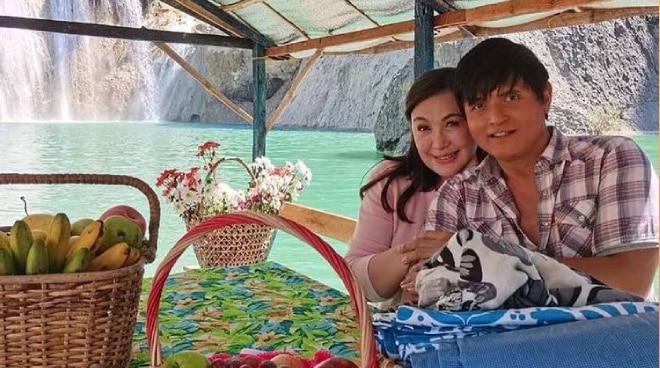 In the episode, an emotional Aurora Guillermo (Sharon) reminisces her past relationship with President Oscar Hidalgo (Rowell), beginning from when they confessed their feelings for each other as young, close friends.


Later, Oscar promises Aurora that once they get married, they would move to Manila and start their own family there, while he takes up law. A seemingly worried Aurora then expresses her concern over the possible reaction of her father Don Ignacio (Tommy Abuel) once he learns about their relationship.

He then proceeds to give her a necklace before professing his love for her. "Mahal kita, Aurora," says Oscar. "Mahal din kita, Oscar," replies Aurora.

The scene ended with present-day Aurora, in tears and still obviously devastated over her breakup with Oscar after so many years.

In the comment section of the episode, which was uploaded on the YouTube channel of ABS-CBN Entertainment, netizens expressed their delight over the onscreen reunion of Sharon and Rowell—or as they are known to their fans, "ShaWell."

"The chemistry!" another wrote.

Meanwhile, Sharon shared on her Instagram page behind-the-scenes photos from the hit episode, including their "kilig" waterfalls date, and snaps of her and Rowell in an embrace.

Sharon and Rowell were a popular love team in the 1980s. They spawned a following after co-starring in the movie Cross My Heart in 1982.

Earlier, Sharon admitted that she considers Rowell as her TOTGA or "the one that got away."

"I can live without most everyone else (*including any other ex!) outside of my family, but I can never live without this boy in my life. One of my bestest friends, TV show and concert director, leading man. Always the lovest. Like Kiko (her husband), his heart is so pure. So decent. A true gentleman. Truly TOTGA," she wrote in her previous post.

Their onscreen reunion was one of the things fans had looked forward to when Sharon was announced as a cast member of FPJ's Ang Probinsyano last November.