Popstar Ariana Grande is among the thousands of Instagram users who follow Filipina Broadway star Lea Salonga on the popular image-sharing app. Pop star Ariana Grande, it would seem, is also a fan of the actress; the "thank u, next" and "positions" singer is among the thousands of Instagram users who follow Lea on the popular image-sharing app. And that's saying something, given that Ariana—who has more than 281 million followers and who used to be the most-followed woman on Instagram—only has more than 900 people in her following list, including, among others, Adele, Angelina Jolie, Selena Gomez, and Kim Kardashian. 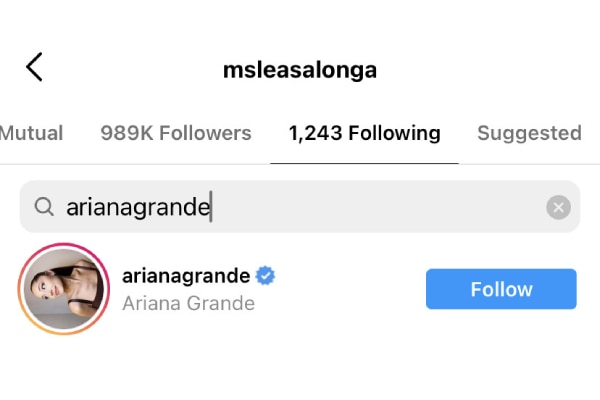 Lea's rise to international fame began when she played the lead role of Kim in the musical Miss Saigon—first on the West End and then on Broadway—at the age of 18.

She went on to star as Eponine in the Broadway production of Les Misérables in 1993 and Mei-Li in the Broadway version of Flower Drum Song in 2002. Lea was also the singing voice of Princess Jasmine in the Disney movie Aladdin and Fa Mulan in Mulan and Mulan 2. For this, she was recognized as a Disney Legend back in 2011.

Recently, it was announced that Lea will star in the upcoming U.S. television series Pretty Little Liars: Original Sin.

A release date for Original Sin wasn't announced, but filming for the series already began in upstate New York last August, according to Just Jared Jr. The new episodes will premiere on HBO Max.