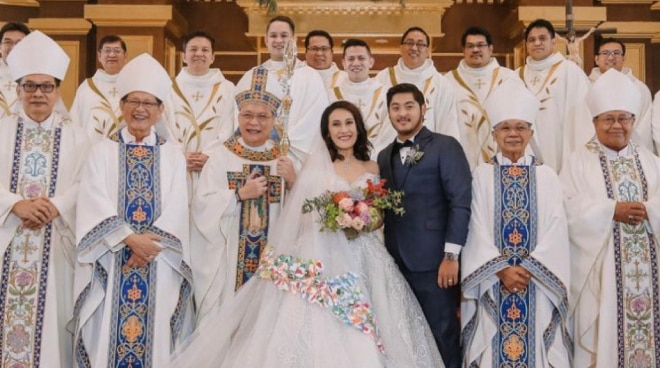 On her Instagram page, Aiai shared photos from their church wedding, along with her special message for her husband.

Seven months after announcing their engagement, Ai-Ai and Gerald tied the knot in a star-studded ceremony at Christ the King Parish in Greenmeadows, Quezon City on December 12, 2017.

The two first met in 2014, at a badminton game where they were introduced to each other by a mutual friend.

Prior to Gerald, who is a former athlete and a pilot nearly 30 years her junior, Ai-Ai was married twice—to singer Miguel Vera and to businessman Jed Salang, the latter of whom she separated from after just over a month of being together. Her divorce from Salang was recognized by the Quezon City Regional Trial Court in 2016, allowing her to remarry.

Recently, Ai-Ai and Gerald sparked rumors of moving to the United States to start a new life, after the actress posted a photo of their arrival at an airport in Virginia early this month.

"Yes, North Virginia here we come. Our journey begins here. Thank you dear Lord and Mother Mary we landed safely. Love you, my darling. This is it start na ng buhay natin together," she captioned the photo, along with the hashtags #excited and #payapangpamumuhay.

Her caption about starting a new, peaceful life with her husband prompted comments from fans asking whether they have moved to the US for good.

Nevertheless, the comedienne did not say whether their vacation will be brief or long term, nor did she give an explanation for her intriguing caption.