Vlogger KC Concepcion fulfills her dream of meeting the ‘Sex and the City’ star in person during a film premiere in New York. 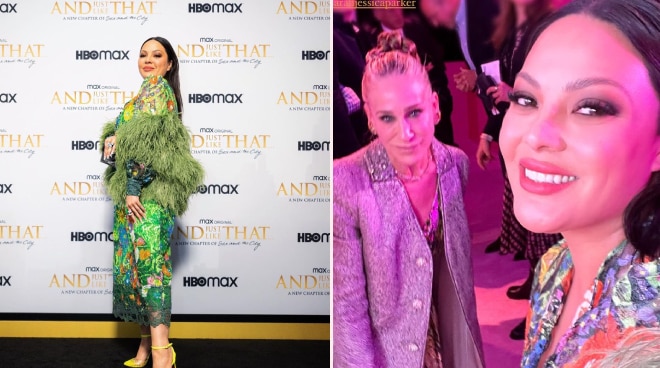 Ever since she made the US her home base this year, vlogger and businesswoman KC Concepcion has made it a point to enjoy everything life has to offer, from going back to school to reconnecting with old friends, and traveling around to see the sights. Last December 9, the 26-year-old jewelry designer had an unforgettable fan girl moment when she took a selfie with Hollywood star Sarah Jessica Parker at the premiere for her new film And Just Like That which was held at the Museum of Modern Art in New York City.

She wrote, “And just like that… some new dreams I dreamed came true. ✨”

Aside from SJP, KC also shared photos she took with other celebrities who attended the intimate premiere like American radio and television talk show host Andy Cohen and fashion designer Prabal Gurung.

For her look at the premiere, KC’s glam team included celebrity makeup artist Hung Vanngo and hairstylist Henry De La Paz. In a separate post, KC wrote, “My heartfelt thanks to the NY/CA GUCCI Team for bringing forth my inner Carrie Bradshaw at last night’s intimate #AndJustLikeThat premiere 💫 I had so much fun with this!!!

“Especially grateful for my dear @marsbe who got hard at work playing dress up with me to properly celebrate the new chapter of Sex and the City! @hbomax fam, especially my dearest @jpreyesmallo, thank you for inviting me as your guest to celebrate friendship, fashion, love, and most of all, life. We had less than 72 hours. “‘It wasn’t logic, it was love.’ ✨”

After spending the lockdown in Manila last year, KC flew to the US last June where she decided to relocate for the meantime as she resumed her gemology studies in the city of Los Angeles, California.