Derek Ramsay’s mom couldn’t be any happier to see Ellen Adarna by her son’s side. 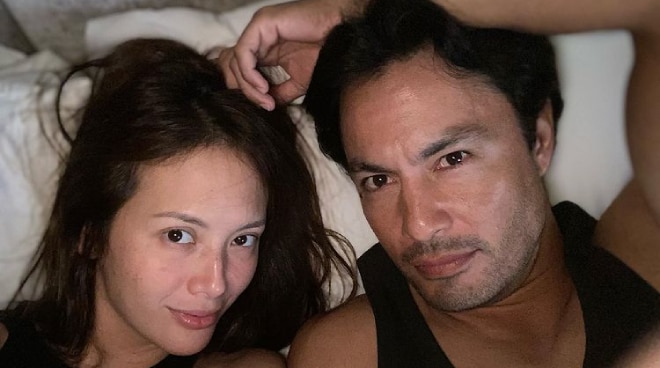 Derek Ramsay’s mom shared how she feels about her son’s marriage to Ellen Adarna.

In an interview with former Teleradyo anchor Pat-P Daza for philstar.com, Derek’s mom shared a lot of things about newlyweds — including why they rushed into getting married.

It can be recalled that Derek and Ellen met in January through John Estrada, confirmed they were in a relationship in February, and got engaged in March — all within three months. They just came from longtime relationships when they first met.

According to Derek’s mom Remedios, “things happen for a reason” — and their marriage, is, among others, an “answered prayer.” She said she can see how happy her son is right now with Ellen by his side.

“It’s no secret they both came from high-profile relationships that lasted over a year. Everyone was surprised it happened so fast but for me, things always happen for a reason, the reason being that my prayers were answered,” Remedios said.

“I have been praying for so long that my son would find someone who loves him sincerely and will give him everlasting happiness. I can see now that my son is very happy when he is with Ellen, and likewise Ellen is the same. Everybody can see how happy Derek is now,” she added.

Derek Ramsay on Ellen Adarna: ‘She’s the one’

When asked why they click, she said: “I think mainly because they are both REAL. What you see is what you get. They are both not afraid of what people will say so they continue to be honest and sincere about how they want to live their lives.”

Meanwhile, Derek’s mom said the couple will still continue with their respective showbiz careers and confirmed that her son will be doing a project outside the country next year.

“As for their plans, I’m sure they will continue with their respective careers. Derek has a contract to do an international movie in Puerto Rico next year,” she said.