Counting down to their wedding this month, actress Trina Legaspi shared photos from her official prenup shoot with her fiancé, Ryan Jarina. 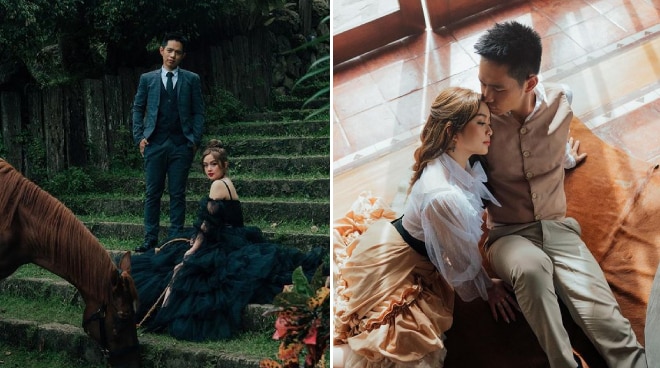 Counting down to their wedding this month, actress Trina Legaspi shared photos from her official prenup shoot with her fiancé, Ryan Jarina.

She credited Metro Photo for the pictorial, which shows her and her fiancé posing with a horse while all glammed up.

"We’re headed back to the countryside for our prenup shoot. Here’s to the future Mr + Mrs Jarina!" Trina captioned the equestrian-themed photos.

"Love doesn’t always come easy, but that’s what makes it worth fighting for," she also wrote.

In her subsequent post, Trina confirmed that she and Jarina will be tying the knot later this month, though she did not give an exact date.

It was in November 2020 when Trina, who rose to fame as a cast member of Goin' Bulilit, announced her engagement to Jarina, her boyfriend of more than seven years.

"Without a doubt, in a heartbeat, I said YES! I can’t wait to marry my first and only love," she said at the time.

In an interview on Magandang Buhay last March, Trina revealed that she and her fiancé first met in 2014, at the latter's birthday party.

Trina's close friends Julia Montes, Michelle Vito, and Angeli Gonzales will be part of her wedding entourage, while Goin' Bulilit director Edgar “Bobot” Mortiz, whom the actress has said she considers to be a father figure, will be attending the ceremony as a godfather.