AC Bonifacio is Star Magic Records’s debut artist: ‘There’s a lot of pressure on my shoulders’ 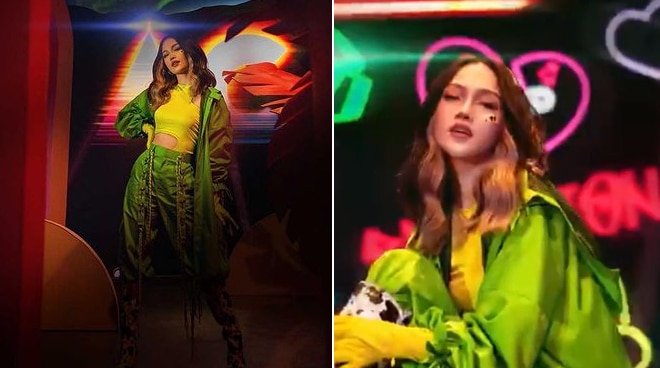 Known in the industry as the “New Gen Dance Princess,” dancer AC Bonifacio officially ventured into singing after being launched this month as the new Star Magic Records’s debut artist.

“It’s definitely a lot of pressure. I was telling people that it’s a lot of pressure to be the first artist of Star Magic Records but you  know it’s another door for more artists to be able to show off OPM to the world and I’m just going to start that off. But I’m going to try and do my best for people to enjoy and bring out Filipinos to the international world,” AC said during the Star Magic Records mediacon last November 4.

AC said she couldn’t believe that she was now working with music industry professionals that she has looked up to for many years now.

“Grabe I’ve been in the industry for a while now and I’m friends with sila Darren (Espanto), sila Kyle (Echarri) and they always get to work with sir Jonathan (Manalo) and sir Roxy (Liquigan) and direk Lauren (Dyogi) and ina-idolize ko kasi sila. So now that I get to work with them and with this new label too and this song, I’m just so, so excited. There’s a lot of pressure on my shoulders to be the first artist under Star Magic Records and I will do my best and I will work as hard as I can to show them what I can do,” she said.

Working closely on her first single “Fool No Mo” with veteran producer Jonathan Manalo, AC shared what made her first recording experience not just memorable but enjoyable as well.

“I absolutely loved working with sir Jonathan. Idol ko talaga siya. I just never got to work with him yet. They sent me the song but it sounds so different from what it sounds like now. He gave me the freedom to change the things that I wanted and I wrote a part of this song.

“Even until now, even when the song was almost finalized, I would still bring in some comments and he’s still game to change it or to fix it. I absolutely loved working with him even when we were recording, I was so scared kasi first time ko mag-record sa purple room and I would see all my friends recording there. I was like, ‘Oh my gosh, ito na talaga yun!’ Sir Jonathan made it so easy and I know he could tell that I was nervous and he was coaching me and helping me and it became such a memorable moment for my career,” she explained.

As she continues to strive to be a well-rounded performer, AC revealed which local and foreign artists have inspired her through the years when it comes to being a true artist.

“People who inspired me to become a performer was really tito Gary (Valenciano) and ate Sarah (Geronimo). Because when I was in Canada pa, they would come for international shows and I was like five or six years old and kami yung nag-pa-front act for their shows and just to watch them perform and then when they go home I watch them on TFC and on ASAP. I wanted to be them. My musical influences naman, I feel like a big part of me ihas been like Ariana Grande somehow kahit hindi ko kaya mga notes niya (laughs) but she inpires me. Nikki from 88rising, BLACKPINK has definitely been a big, big, big influence on my life,” she shared.